Home / News / Kids make the darndest things: TechU’s AppJam and the magic of creating something from nothing

Kids make the darndest things: TechU’s AppJam and the magic of creating something from nothing

Nestled amid the hustle and bustle of the Ottawa Game Conference – in the corner of the Ottawa Convention Center’s second floor main hallway – I found something special.

I’ve snuck in at the last moment, just as the lights are dimming, attention captured by a sign that talks about high schoolers making games. I’ve got midday conference fatigue and even if the detour turns out to be a bust, I’ll at least snag a free water and zone out. I’m not much in the mood for another talk about virality or gamification. And yet as soon as I enter the room, I feel a palpable energy.

Standing up at the front of the room addressing a gaggle of students dressed to impress is a member of the Ottawa Network for Education – a local organization focused on creating programs to stimulate creativity and learning in students of all ages. After thanking the day’s sponsors and commending the participants, she starts to talk about just one of those programs: AppJam 2012.

Styled as a long-form competitive hackathon for teens, AppJam is a challenge to build and submit the highest quality game, experience, or experiment possible. The prize? A six-week summer internship at companies like RIM, IBM, and Bitheads, as well as a thousand dollars in cold hard cash for the trouble. “They definitely didn’t have this when I was in high school!” Suddenly, I’m paying very close attention.

AppJam, it seems, is the culminating event of a year long effort to to engage kids in the creation of software and the writing of code. Dubbed TechU, the program links industry mentors worth schools and students, who are taught the skills necessary to dip their feet into the waters of worlds like PC development, mobile app creation, and more. From there, the lifecycle is completed with in-school programs like the one being described to me.

“Many of you here today have created games commissioned by your younger-grade ‘clients,’ for the purpose of creating an experience that is both educational and interactive.” It’s hard not to be blown away. When I was in high school, a lot of my teachers didn’t even have computers in the classroom for their own personal use. And here I am in a room full of students who get to go to school for making apps.

AppJam and TechU seem indicative of an ethic you don’t get to see enough in a media landscape dominated by warnings about the ills of technology. Where too much internet usage will poison the brains of our youth, and where playing videogames turns young boys into the violent killing machines of tomorrow. Here, in this room, I’m hearing about tech. as a must. As a a force for doing good, and making others want to do the same. I’m hearing about the way tech changes the world.

But the students? They’re not hearing much of anything. From the looks of it, almost all of them have ignored half the speech, tuning it out amid the shuffling of their own feed, half-whispered conversations with their development teams, and their own excited voices surely screaming inside their heads. Summer jobs are at stake. Summer money is at stake. Suddenly, the speaker finishes the formalities and points to the cumbersome, media-friendly jumbo cheques in the corner of the room. Suddenly, the kids are paying very close attention.

One by one, names are called, and beaming students half walk, half run up to the front of the room to enjoy their photo op., meet the representative of their part-time summer employer, and wave back to their friends. No one seems like they knew each other before AppJam. No one seems to think that matters. Slowly but surely, it becomes clear that everyone is walking away with something today; those without summer jobs are being given Blackberry Playbook’s, which many of the teams developed apps for. The message is clear: TechU is about teaching students that creating content is rewarding. Its own reward, even.

After the dust settles, and the lights go up, I slowly make my way around the room, looking at the projects of some of the “winners.” When Nicholas Landria looks back excitedly, I stop to talk to him. Landria is the creator of Dungeon Fighter, a “dungeon-crawler you play using the arrow keys.” Far from hipster homage, Dungeon Fighter looks like nostalgia come to life. A little simple, to be sure, by virtue of its creator’s novice, but all the purer for it. I ask Landria why he made it. His answer? Like Dungeon Fighter, it’s simple. Pure.

“”I love to play games,” he says matter-of-factly… so I figured, I could probably make them too, right?”

Far from looking at this as a key into a broader industry, Landria seems drawn to gaming because he loves to game himself. In an industry laden now more than ever by metrics, user retention, and attempts to find (or clone) the next big thing, it’s refreshing to talk to people making games because… just because. Not to say Landria doesn’t have a vision.

“I’d definitely like to get into a company and work for them… or even do my own games… I don’t know really. I’d like to make games where people are going, ‘wow, how did they do that!?‘ That’s great.”

The sentiment seems shared. Duo Renee Fortier and Moe Habashy won summer internships both for their educational title The Trash Job – a matching game based on the idea of slotting the right refuse into bins of proper colors, sizes, and types. Like Landria, both boys don’t seem to care about fame or money when I ask them what they’re making games for.

Softspoken Habashy is even more to-the-point: “Well it’s one of my hobbies, I just love to make games.” 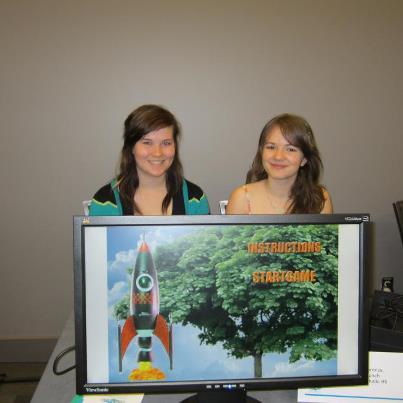 Last to pack up, and already on their way out when I find my way over to them are Melanie Lapointe and Kristen McCormick. Both in grade 11, the two represent one of the only female teams at the event. An event which – just an hour earlier – hosted two “booth babe” caliber models dressed in bikini tops through the convention center to represent a local company’s upcoming space shooter. As the two oldest participants, I ask them about the idea of role models. Do they feel a responsibility to create games? To show that women in the industry have a place in that arena?

“Well I hadn’t really thought of it until now, but it’s true,” says Kristen. “I saw the girls out there dressed in nothing, and I was wondering if this was really the message we want to send.”

Melanie adds: “I think it’s important to show girls there are a lot of role models to learn from in in the industry. People who can say ‘I’ll show you, I’ll teach you, and you can do it yourself.'”

And so nestled amid the hustle and bustle of the Ottawa Game Conference – in the corner of the Ottawa Convention Center’s second floor main hallway – I found something special: the future.