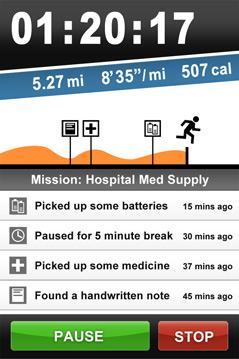 Augmented-reality games are a funny thing. Sometimes they’re as simple as using the camera on your phone to shoot at UFO’s in your living room. Other times they’re location-based games that have you fighting for real turf with virtual magic. ZOMBIES, RUN!, however, asks you to do the one thing we’ll all have to do when the inevitable zombie apocalypse comes, and you can probably guess what that is just from the title.

Operating primarily on audio cues (a neat trend in mobile gaming – take a look at Papa Sangre for another great example), ZOMBIES, RUN! will provide players with audio instructions on how to help rebuild society after zombies have wrought destruction on civilization. To do this, players will need to, well… run. You’ll run to medical depots, run to ammunition warehouses – you’ll run to a variety of places that can help the human race rebuild. Of course, you’re bound to run into a few zombies along the way – and that’s when you’ll have to really run.

Essentially a gamified version of RunKeeper or Nike +, ZOMBIES, RUN! looks to be equal parts game and fitness app. What’s more, the developers suggest that radio messages you receive will form a larger story, keeping players on the edge of their seat (if the game allowed them to sit) as they learn about how the zombie outbreak occurred and what’s really happening at their home base.

In between runs, you’ll be able to take the items you’ve collected and assign them to particular parts of your base, adding to the overall experience.

Like all Kickstarter projects, ZOMBIES, RUN! needs donations to see things through to completion. However unlike many projects, this one has already blown past its initial goal, and sits at no less than triple what they were asking. So why highlight a game that’s already ready to develop? Well firstly, it’s just a cool premise that’s hard not to share. Secondly though, the developers are using those extra funds for some pretty great stuff. Because of the extra funding they’ve now committed to an Android version by May 2012, aim to add RunKeeper integration (YES!), and create couch-to-5k and marathon training mission packs. Oh – and they’re going to try and recruit a different celebrity to do voice work for every $5000 above the goal they reach. 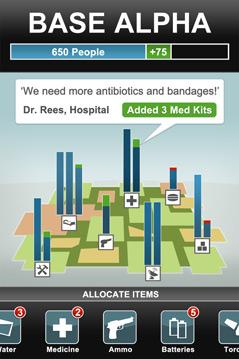 Depending on the amount you donate, pledges can net you everything from t-shirts and posters to the opportunity to create in-game characters or brands. Be sure to check out the full range of options on their official Kickstarter page. Thanks to their Kickstarter success so far, you can expect this one to hit the iPhone February 2012.