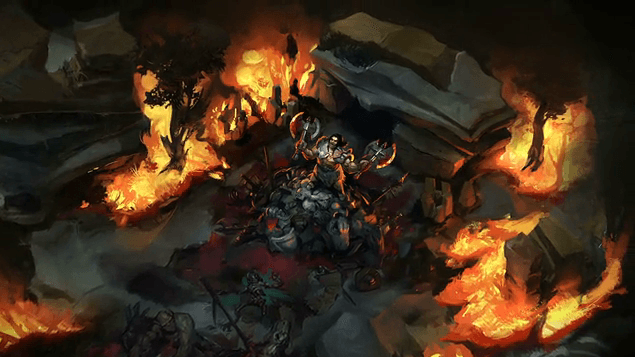 Wildman‘s gameplay breaks up into two different sequences: large-scale RTS battles and RPG adventuring. You control the eponymous Wildman in both sections, ostensibly because he’s a powerful tour de force who needs to participate in more than one genre if he hopes to satiate his thirst for destroying stuff. What else would you expect from someone with a name as strong as Wildman?

But despite the combat-heavy nature of both of these genres, there’s more to Wildman than just destroying stuff—kind of. You’re also in charge of building an army for the RTS sequences, not to mention issuing the orders that lead them to victory against opposing troops. So while you’re roving about the battlefield and attacking enemy soldiers, you’ll also be making sure that your army is doing as much as they possibly can to assist you.

And when a battle is finished, the game’s RPG elements come out to play. You can explore the world at large, conquer dungeons, battle enemy hordes, and seek out new armor and weapons for use in combat. It isn’t like someone as powerful as Wildman needs weapons or anything, but who could say no to a random mallet found in the maw of a dangerous dungeon? No one, that’s who.

If all these opportunities for beating up other dudes isn’t enough for you, it should come as great news that the environments are also destructible, and thus you can beat them up as well. In fact, one piece of artwork for the game (above) shows Wildman standing atop a mound of conquered enemies, still-burning trees and other ruins all around him. He cares not for the positive effects that trees have on our planet, nor does he pay any mind to the warnings of Smokey Bear. That monster.

Before Wildman can be completed, Gas Powered Games is in need of some funding. Their recently launched Kickstarter page is requesting $1,100,000 and, based on what’s been shown of the game, that seems like a pretty fair amount.  And if you have concerns about whether or not the studio is capable of delivering what Wildman promises, keep in mind these are the people who brought us classics like Dungeon Siege, Supreme Commander, and Demigod.