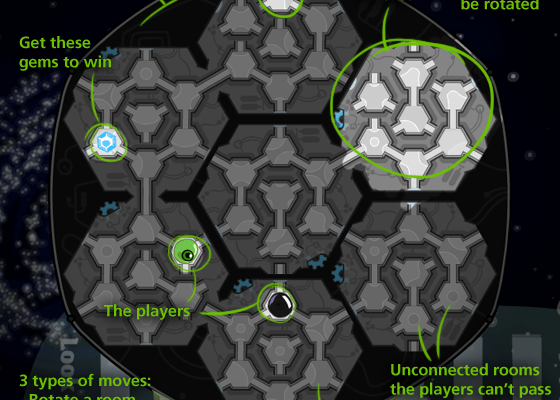 All great puzzle games have one thing in common: they’re easy to learn but difficult to master. Then there’s UFHO2, which is simple to learn but progresses to “such strategic depth that it could easily melt your brain.” These aren’t my own words but those of the game’s developers, who are hoping that funds raised through Kickstarter will allow them to put the finishing touches on the project.

UFHO2 takes place in a maze of small hexagonal rooms that are connected by corridors. The goal is to move through the maze and collect blue gems, while avoiding opponents who are trying to do the same thing. Each one of the hexagonal rooms can be rotated to connect or disconnect the pathways, and the action is turn-based, so you always have to be thinking one step ahead of your opponents.

The diagram and video below, from the Kickstarter page, explain the gameplay best: 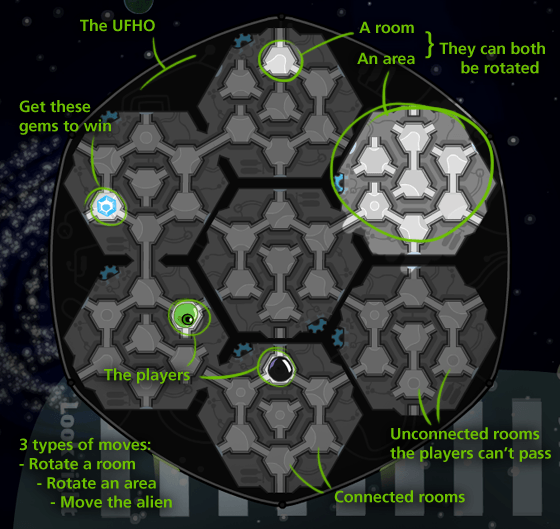 Story mode pits you against cunning alien races while introducing the rich game world. Each alien world you visit will have different level layouts and opponents that affect the gameplay. There will also be local multiplayer mode that lets up to four players play together on the same computer or tablet.

UFHO2 is being developed by Tiny Colossus, a studio with a core team of two that consists of developer/programmer/artist Ciro Continisio and audio guy Francesco D’Andrea. The team is hoping to use the funds generated on Kickstarter towards the additional assets and outsourcing that are needed to finish the game, as well as investing in porting the game to different platforms.

There are some wonderfully creative goodies up for grabs for those who contribute to the Kickstarter campaign, including UFHO2 T-shirts, and a hand-painted UFHO2-themed Xbox 360 controller. If you pledge $500 or more, the developers will even fly to your house and hand-deliver your prizes personally (only if you live in Europe).

UFHO2 is planned for release on PC and Mac initially, with versions for iPad and Android tablets hopefully to follow later. Versions for iPhone/iPod Touch and Android phones are also being considered. If you’d like to learn more about the game and how to contribute to its development, visit the official Kickstarter page.

Kickstarter Picksis a series of features on Gamezebo that will profile Kickstarter projects in the world of video games. We’re doing this in the hopes of calling attention to interesting projects in need of funding, so please, if a game looks like something you’d want to play, don’t hesitate to lend it your support!