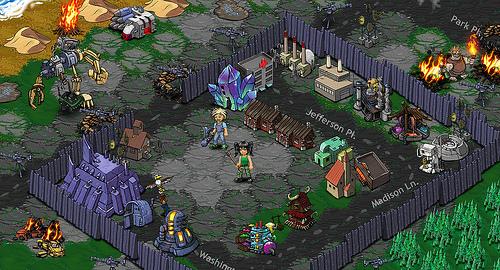 Trust not the Machines. Today, your toaster placidly browns your bread; tomorrow, it’ll attempt to toast your skull. I, for one, don’t welcome our inevitable machine overlords. Techpocalypse is a co-op strategy-survival game that will educate you on the best ways to dispatch the Machines–but the project needs funding to get off the ground. That’s where Kickstarter comes in.

In the world of Techpocalypse, robots have taken over, and it’s up to the last of humanity to fortify its defenses and fight back. This involves a lot of preparation, a lot of fighting, a lot of scavenging for materials, and a lot of diplomacy with other human tribes–unless you want to grind said tribe into the dust, of course. Hey, once the Machines are done away with, humanity will be back to cannibalizing itself, so why delay?

Techpocalypse features a sprite-based graphics, and a top-down isometric view. Most intriguingly, the game implements real-world data for the in-game map. Does your tribe require sustenance? Better hoof it to McDonalds. Need some metal-chewing chainsaws? Your friendly hardware store will take care of that.

A considerable chunk of Techpocalypse is already done, but Anomaly Labs is hoping that Kickstarter will come through with the $50,000 necessary for fine-tuning. To elaborate (via the Techpocalypse Kickstarter page): “Techpocalypse is 90% done. Now we’re working on the other 90%: balancing and fine-tuning gameplay, polishing the graphics and UI, finding and fixing bugs, fleshing out stress testing the servers, and fleshing out all the little details that distinguish a first-class game.”

If you contribute, you’ll get all kinds of cool prizes. Your continued survival, for instance. If that’s not enough to tempt you, consider Anomaly Labs’ list of goodies. For a $10 pledge, you’ll be able to access an early closed beta of the game, and you’ll receive a crate of rare in-game items. For $100 or more, you’ll get a pretty sweet anti-Machine propaganda poster to terrify your neighbors with. For $6000 or more, you’ll be flown out to Seattle to join the Anomaly Team to help develop the game for a day (no robots allowed)!

Interested? Visit the Techpocalypse site and join the good fight.

People play mobile games at home and in bed, but not the bathroom

4th quarter of 2011 nets $3.3 billion in revenue from digital/alternative streams