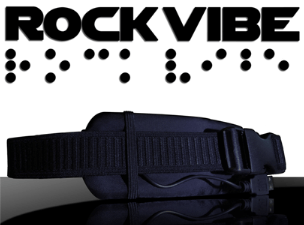 There aren’t a lot of gaming options out there for the blind, but Rock Vibe aims to change that. The brainchild of indie developer Rupinder Dhilon, Rock Vibe is a potentially revolutionary music game similar to Guitar Hero and Rock Band that makes it possible for blind (as well as sighted) gamers to play along by wearing vibrating gloves or belts that pulse in time to the music.

Rock Vibe began as a research project at UC Santa Cruz in 2008, and has been in development ever since. Dhilon hopes that with additional support, it can be developed into a full-fledged rhythm action game that can be played on PC and Mac, using mainstream music, by early 2013.

One of the most intriguing things about Rock Vibe is that it aims to appeal to both blind and sighted gamers alike. “Typically, games designed for blind gamers are audio-based side-scrollers that don’t appeal to sighted gamers. Many gamers find audio games to be too simple and quickly bore with them. Rock Vibe aims to address this issue by using a wearable electronic device and popular music for gameplay, allowing both blind and sighted gamers to enjoy gameplay,” Dhilon explained in an email. “Additionally, the wearable electronic device puts all gamers on equal footing, since games aren’t typically played by responding to site-specific vibrations on the body.”

Dhilon hopes to raise $32,000 for the project via Kickstarter by Jan. 20. Funds will be used to complete the game’s development, add a 2-player mode, manufacture the wearable electronics, and donate several copies of the game to organizations that work with blind children.

Contributors to the Kickstarter campaign will receive goodies including a CD with the Rock Vibe software, schematics on how to build your own electronic wearable, a “thank you” acknowledgement on the official website, pre-assembled versions of Rock Vibe, and the chance to add a song of your choice to the game.

Rock Vibe is a little over half way to reaching its goal, and has already received significant support from non-profit organizations and gaming industry bigwigs, including the CEO of Harmonix (makers of Rock Band), and staff members from Sledgehammer Games and Crystal Dynamics. If you’re as intrigued by this project as we are, check out Rock Vibe‘s official Kickstarter page.

Cut the Rope now playable for free in your browser

Is Microsoft looking to bring Xbox Live games to Android and iOS?