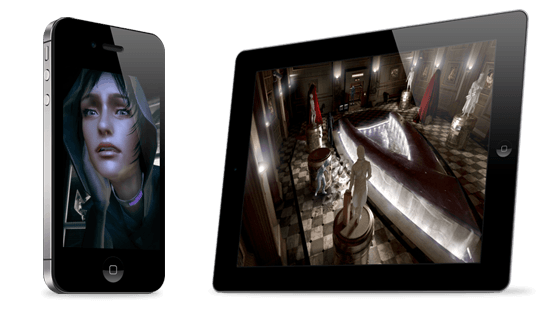 Big Brother is Watching You. But in a unique game that’s being proposed by developer Alexei Tylevich and two game studios, Camouflaj and Logan, Big Brother may actually end up being your best friend and your savior. That’s the general idea behind Republique, a “symbiotic” stealth-puzzle iOS game that puts you in charge of a young woman who’s desperate to sneak out of a mysterious, totalitarian state.

Republique stars a hoodie-wearing girl named Hope. Hope has stolen a telephone, and it’s her one chance to get in touch with an all-seeing friend (you) who might be able to help her slip by cameras, crack into computers, and do whatever it takes to escape from the all-seeing “Overseer.” But you have a pretty good range of vision yourself, thanks to the eagle-eye view the game grants you. You can also access computers, cameras, and network-enabled devices by simply tapping on them. You can even slam doors in the faces of pursuers (take THAT, dictatorship!). Hope’s escape won’t be easy, though. If you fail her, all is lost.

Tylevich specifically chose iOS for Republique because the game itself revolves around the communication opportunities that are afforded by modern phones. That, and he was simply tired of waiting around for someone to make “real games for iOS.”

“Without fail, every company we’ve shown our game to has expressed sincere excitement about its creative ambitions,” Tylevich wrote on the Kickstarter page for Republique. “In unison they proclaim: ‘Yes! This is exactly the kind of game I want on my iPhone and iPad!’ But when it comes down to dollars and cents, the most consistent feedback we get is: ‘You have to prove that there’s a market out there for this.'”

The task therefore falls to us, gentle gamers, to prove that there is a market for risky, innovative titles like Republique.

Of course, you’ll get some pretty boss stuff for pledging (rewards are cumulative). For $10, you’ll get a digital version of the game for iOS. For $25, you’ll get a downloadable soundtrack. For $50, you’ll get a book/”game companion” that is meant to give you the full Republique experience. For $100, you’ll get the Republique Journal, plus a CD soundtrack and more, all contained in “Overseers Manifesto” collectable packaging.

For big spenders: if you pledge $1000, your name will be integrated into the story’s mythology. For $5000, you’ll get your face integrated in there as well. For $7500, you’ll have your voice infused in the whole shebang. And finally, for $10,000, you’ll be flown out to the studio to play the game and have an awesome lunch with its awesome Camouflaj and Logan dev team.

Free downloadable guide now available: Why Video Games are Good For You