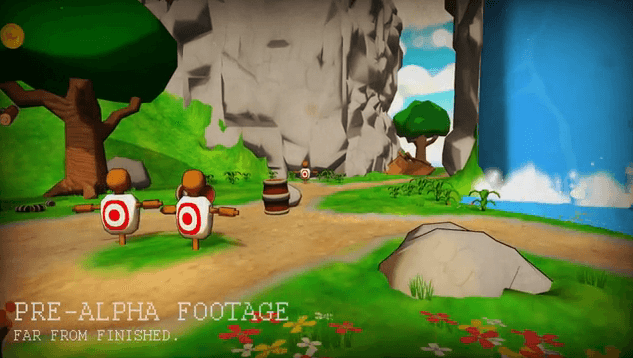 I’ve said it once, and I’ll say it again: you can never have too many action-adventure games, especially ones that take place on a colorful, tropical island! Project Cornerstone is an open world action-adventure game with an emphasis on environmental physics puzzles, and from what we know about the game so far, it looks to do the genre proud. The game is currently in development for PC, Mac, and Linux platforms, and seeking funding from fans on its Kickstarter page.

In the game, you play as a boy named Tyrim, who lives in a remote island village with his mother and twin siblings, Vida and Birka. When things start to fall apart around the village, Tyrim decides to set off on a quest to find his father and the other men of their community, who have disappeared on an expedition over several years ago. The five-man developer team is keen on explaining why other details of the game remain so scarce: because they want you, the player, to have as much input on creating your own game experience as possible! They want you to know that Project Cornerstone will be your game just as much as it is theirs.

The pre-alpha, “far from finished” footage of Project Cornerstone already looks fantastic, with a vibrant 3D island setting that harkens back to those wide-eyed geometric worlds of a Nintendo 64 game. Graphically, the game resembles the cartoony wonder of The Legend of Zelda: Wind Waker, and I can already tell I’m going to have way too much fun exploring every grassy hill and valley.

The developers are striving for that pure sense of open-world engagement that can only be found in such console titles as The Legend of Zelda, Shadow of the Colossus, and The Elder Scrolls V: Skyrim, and the kind of tactical combat that’s used in Dishonored. But of course, with a much more sunny and lighthearted vibe! You’ll be strategically picking up and moving rocks and barrels, and even laying down trails of gunpowder to trigger unique timed explosions. The game will also employ a simple, yet logical crafting system, where base resources like wood and gunpowder can be combined to make explosive powder kegs, and wood, paper, and fire can be used to make matches. You can even ride on wooden ships to travel to neighboring islands!

Project Cornerstone is almost a third of the way towards reaching its Kickstarter goal of $24,000 before the pledging window ends on March 9, 2013. The higher-end donation packages offer some pretty nice rewards too, like creating your own character with dialogue and backstory to be put in the game ($200), or designing your very own island ($500)! The game has an estimated release date of February 2014, so it looks like we’re going to have to wait a bit to see what else this promising title has in store, but at least that gives me some time to stock up on my resources and get ready to travel!