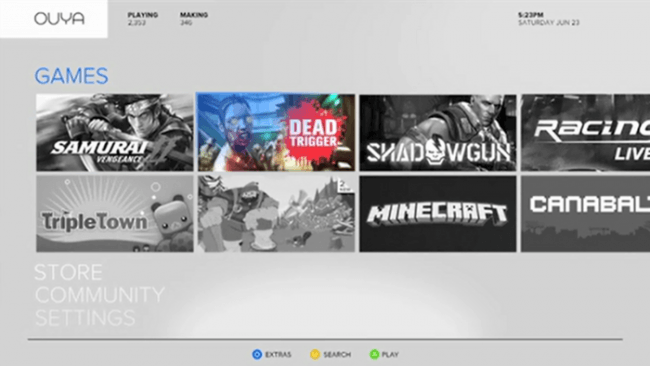 The current console cycle has been one of the longest in the history of interactive media. After six long years, Nintendo has finally announced their newest iteration, the Wii U, and Microsoft and Sony are soon to follow. These three systems are the only ones that are created exclusively for entertainment on the big screen, and getting the chance to develop for a major console is an extremely daunting prospect for a smaller developer.

OUYA, the new Android-powered, $99, free-to-play, hackable console is hoping to change that aspect of the console market completely. Their new system is now available via Kickstarter, and it’s already exploded to over $500,000 funded.

The concept, as defined over the past few weeks by folks like Yves Behar, Ed Fries, and Julie Uhrman, is to create an affordable console that encourages freedom for developers, community modifications, and ease of use. It’s a bold concept, and in the world of increasingly excellent indie games for tablets and phones, it could mark a revolution for independent game developers.

With the announcement of a Kickstarter, OUYA hopes to gauge community interest and see how strongly users would like to see an openly modifiable console on the market. In addition, OUYA is using their Kickstarter page to release a plethora of new info. Most importantly: the system specs now reveal that the system will run on a Tegra3 quad-core processor, have 8GB internal storage, connect via HDMI up to 1080p, and have a solid 1GB of RAM. For a $99 console, those are some promising stats.

There’s still plenty of information to come from OUYA over the months leading to its release, but the launch lineup is already looking to hold a plethora of solid independent titles. Minecraft, Canabalt, Triple Town, and Shadowgun developers are all on board, along with the streaming company Twitch TV. With more support, this founding is expected only to rise.

Gamers interested in getting the market’s cheapest new home console can get an OUYA and a controller for $99. $225 gets you controllers with your name personally etched into them, $699 gets you an amazing developer package with early SDK access, and $1,337 gets you the aptly named Elite Special – a custom hotline with OUYA with any developer questions that you have. For gamers and developers alike, those are some pretty low costs.

It’ll be interesting to see how the OUYA thrives in today’s market, and whether or not the independent developer can claim a console to their very own niche. If the half a million dollars put forth in a single day are any indication, we’d say some exciting times are among us.

The past, present, and future of Fieldrunners