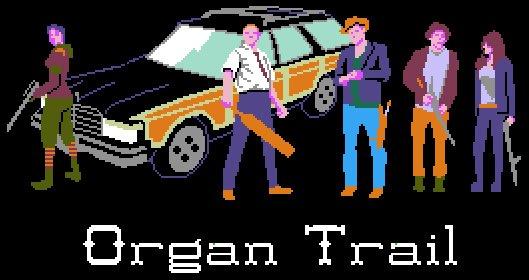 Everybody knows The Oregon Trail. If you didn’t play it in a classroom in the 1980’s, you’ve no doubt seen it since on the App Store, Facebook, or in some popular meme about dying on dysentery. But let’s face facts – surviving the harsh pioneering journey to the west? That’s dead people problems. But surviving a zombie apocalypse? Well… I suppose that’s dead people problems too.

Organ Trail is a parody of the classic The Oregon Trail that tells the tale of a group of people trying to survive in a world suddenly populated by zombies. The game has existed on the web for free for a little over a year, and due to its success, the developers at The Men Who Wear Many Hats want to turn it into a more polished game available for download on the iPhone, PC, and Mac (as well as the iPad and Android if they can reach a certain Kickstarter support milestone).

What’s great about this being a Flash game already is that you can play the original before deciding if you want to donate – and if you’re a fan of The Oregon Trail and zombies, it won’t take more than a minute or two of gameplay to sell you on the concept. The original can be played right here – but The Men Who Wear Many Hats are promising more in the new version than what you’ll see on the web, hence their use of the term “Director’s Cut.”

In the Kickstarter-funded version, you can expect finished art, a new conversation mechanic, a new soundtrack, a tweaked story, and other changes. Contributors will also get a chance to put their own touch on the final product. Depending on their contribution level, they could leave a custom graving on a tombstone, design an achievement, or even create a brand new game mechanic. Other Kickstarter incentives range from pre-orders of the game to the soundtrack, t-shirts, postcards, and even a zombie caricature of yourself.

Organ Trail: Director’s Cut has already reached its goal, but there are still plenty of days left to contribute if you want to see them make an Android/iPad version, or simply want to get some of this great swag. Click here to check out their official Kickstarter page.