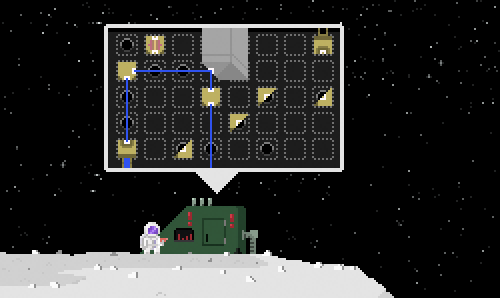 Playing a sci-fi super hero is plenty of fun, but don’t you ever get tired of playing the all-powerful handsome/strong/rich/popular space hero? Being the best isn’t anything to laugh at, but it certainly isn’t relatable, either. What about the modern-day hero? Is it possible to feature the outlandish realm of outer space while simultaneously shedding light on the realistic middle class? Meet Moon Intern.

In this LarryPixel and Comosaur Kickstarter project, you live in a futuristic sprite-based world. You aren’t a decorated war hero or grizzled general, but instead a simple intern looking to afford the rent and live happily with your significant other. While just like in the real world, combat is a possible specialization and profession, there are plenty of ways to live your life and solve your problems outside of going guns blazing.

Life on Moon Intern is separated into episodic events, much like a comic book. Each day, you’ll have the ability to balance real-life everyday tasks such as shopping and working, while exploring and altering a few major story elements. Individual character arcs will change as players make key decisions, allowing for each player to experience a tale that is entirely unique.

Speaking of unique, the entire colony in Moon Intern is one-of-a-kind: it’s entirely based off of the public that backs it. Most of the game’s reward tiers give players a chance to add their likeness and personality (based on a questionnaire delivered by the developers) into the game as an NPC. The concept of living in an entire single-player world constructed out of real players is extremely unique, and it’s very close to becoming a reality.

Moon Intern has just 6 days to close out on a final $3,000 of funding, and there are plenty of cool ways to give them a final push. $10 will get you a copy of the game, but all tiers from $40 to $1,000 will give you an opportunity to have your likeness and personality inserted into the game, with professions anywhere from NPC to Shop Owner to Moon President.

Want to break your daily grind in order to start a new one on the moon? Moon Intern is close to a successful launch, and they need your help!