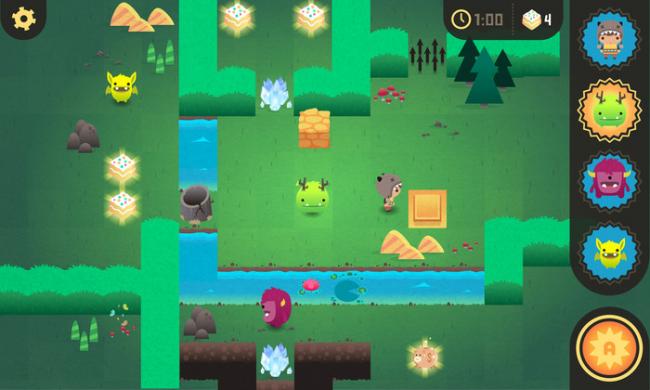 There are a whole lot of ways a birthday can go wrong, but monsters stealing your cake just might top the list. That’s exactly what happens to Niko, the main character of the aptly-named Monsters Ate My Birthday Cake. But Niko’s not the type to sit back and let bullies walk all over him, and he immediately sets out in search of the guilty monsters.

As it turns out, this particular cake thieving was an instance of organized crime, led by the nefarious Boogin King. He and his many monster comrades—called Boogins—have an appetite for sugary treats, and they spend their days roaming the mythical (OR IS IT?) island of Gogapoe and stealing whatever goodies they can find. Clearly, they’ve watched one too many reruns of The Yogi Bear Show.

In case the video above hasn’t hammered it home for you, Monsters Ate My Birthday Cake is shaping up to be one cute game. The appearance of its many monsters—both good and evil—is largely to blame, as is the game’s overall visual style. It’s something like a SNES games sans pixels, which is more than appropriate when you consider the fact that the gameplay was inspired by classics like The Legend of Zelda.

Much of the game revolves around solving environmental puzzles. While that in itself is something we’ve seen in sundry games, Monsters Ate My Birthday Cake offers its own unique twist by emphasizing the importance of Niko’s monster companions in completing the puzzles. This presents a world of different puzzle solutions and opportunities, and some of the known monster powers include ice, fire, and digging.

In order for this game to see the light of day, the creators require a little moolah – $15,000, to be specific. But seeing as how this is a Kickstarter, there are rewards aplenty for those who decide to pitch in. At $5, you’ll receive a copy of the game for iOS; kick in $10, and you’ll get the game on PC or Mac (if you pitch in soon you can get both iOS and PC versions at $10); at higher tiers, you can earn a t-shirt, custom figures, the soundtrack, and various other items. And speaking of the soundtrack, the game’s creators have signed Disasterpeace (Fez, Shoot Many Robots) to compose it.

If the game’s concept and aesthetic appeal to you, be sure to show the creators your support over on Kickstarter!