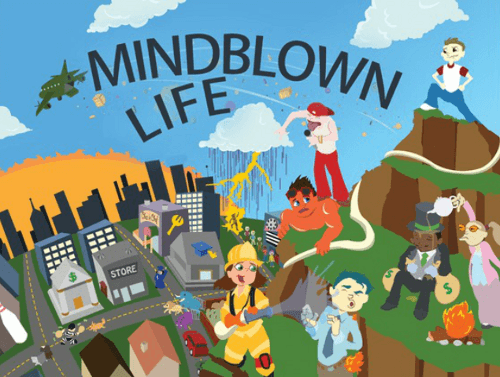 Games have the ability to be incredible educational tools, as anyone who’s played Oregon Trail can attest to. I mean, did you have any idea that Oregon was a state before that game was released? Probably not. And what of financial literacy? That’s something many of us could do with learning more about. If you’re nodding your head in agreement or pondering to yourself what on earth “financial literacy” means, Mindblown Life was made for you.

Developed by the aptly-named Mindblown Labs, Mindblown Life is an “irreverent” life-simulation game that teaches the player about how best to manage their money. It looks as though it will place a particular emphasis on college students, and the ways in which they can fend off the debt and shoddy credit scores they’re so prone to having. Which isn’t to say all other demographics will be cast to the wayside! Judging by the wording of the Kickstarter, it looks like the game will drop truth-bombs on people of all shapes and sizes.

Similar to other sim titles, you’ll have a lot of choices and customization options to make, including the career path of your character. And if you like your educational games to be inclusive, you’ll be able to invite your real-life friends out to dinner in the game, or even let them sleep on your couch. Because that’s what friends are for, guys.

It probably sounds ironic that a game about money management is asking for your money. But it’s not hard to see why Mindblown Life doesn’t exactly have publishers knocking at the door. What kind of product-focused company wants to endorse the notion that people should stop engaging in so much frivolous spending? Not many, I’d wager!

And besides, what better way to learn about investments than to invest in a game that will probably teach you about them? That’s, like, some crazy Inception stuff. If you’ve never seen Inception and don’t get that reference, I recommend you go out and buy 100 copies and give them out to friends and family. And then I recommend you eat out for every meal and max out all your credit cards. I am saying these things because I know nothing about money management, and because Mindblown Life isn’t out yet to teach me the folly of my ways.

Those who pitch in can receive some pretty awesome rewards. At the $5 mark, you’ll be provided beta access to the game, along with a few other digital goodies. At $35, you can get your name in the credits. If you kick in $3,000, you’ll have a statue modeled after your likeness in the game. That’s only a handful of what’s available, though, and it’s worth checking out what all you can receive.

If the funding amount is met, Mindblown Labs is aiming to launch the game on iOS sometime early next year. And if they end up raising enough to pull it off, they plan on creating an Android version as well. So if you’re in the market for some knowledge about financial literacy and how best to take care of your money, go ahead and pitch in!