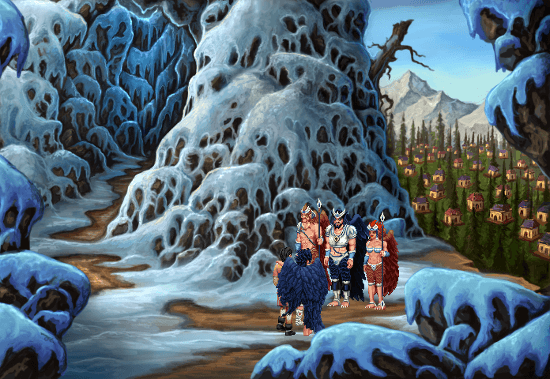 Mage’s Initiation retains the classic atmosphere and gameplay mechanics of King’s Quest and its kin, but it still features plenty of modern adventure elements. There are multiple game interfaces, as well as a free-range magical combat system.The graphics have a retro hand-drawn look to them, but are smooth, polished, and well-animated. You can play as multiple classes, and take down enemies in open-field combat.

Mage’s Initiation stars D’arc, a teenage initiate who needs to complete three tasks bestowed upon him by his Mage Masters. The magical realm of Iginor contains forests full of goblins, lakes full of monsters, and skies full of hostile winged warriors, so needless to say passing the Mage’s tests won’t be as easy as running down to the store and grabbing some cigarettes for them.

Himalaya already has a significant portion of Mage’s Initiation completed, but it hopes to raise additional funds for voice actors, advertising, general polish, and possibly a multi-platform release. Pledge $16 for a DRM-free copy of the game, plus a download of the soundtrack. $20 gets you that, plus a pack of Mage’s Initiation stickers that you can use to initiate your cat or dog into your very own mage’s club. $30 gets you a physical copy of the game plus previous awards, and $50 gets you all that plus a shirt.

If you’re looking to spend a little extra gold, $100 gets you a boxed Collector’s Edition copy of the game, plus additional swag. $200 earns you four polyresin figures of D’arc, plus a full set of trading cards. $400 gets you a cameo in the game. And for $5000, you can become an NPC combatant in the game and mix it up with D’arc in a fight.

There are tons more cool prizes, so be sure to check out the Kickstarter for Mage’s Initiation. Get inspired, then start flinging around spells. Clear all animals from the room first.