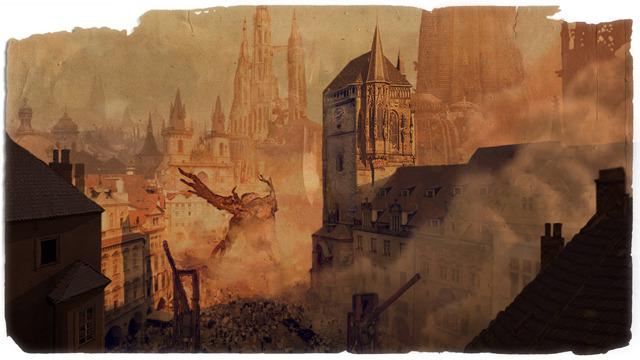 According to Jewish folklore, the Golem is a clay being that was brought to life with a scroll that contained the name of God. A great deal of modern robot lore owes its heritage to the story; think of Optimus Prime as the Golem’s third cousin. But even our modern, shiny robo-men can’t erase the lure and mysticism of the original tale, which is why Moonbot Studios is bringing the clay monster back to life with The Golem, an action/RPG for Mac, PC, and Linux.

The concept art for The Golem looks gorgeous, and that’s no surprise: Moonbot Studio has a heck of a legacy behind it, including the Academy Award-winning animated short The Fantastic Flying Books of Mr. Morris Lessmore, as well as the beginnings of a PlayStation Wonderbook title called Diggs Nightcrawler. Moonbot also developed Numberlys, an alphabet app that picked up a Webby award.Moonbot is hoping The Golem can be an independent project, but that takes funding. Namely, Kickstarter funding.

The Golem is a single-player action/RPG set in 16th century Prague. You actually play through the game as the Golem, which means you must learn how to use your strength carefully. Otherwise, you may end up leveling Prague in your attempts to protect it. As the Golem learns and evolves with the help of Prague’s metal, wood, clockwork, and glass guilds, so does the gameplay.

If you’re thinking you might want to try stomping around as a Golem, Moonbot has some neat prizes lined up for pledgers. $15 will get you the game, plus production blog access. $30 nets you the soundtrack. $50 gets you a T-shirt and Golem artwork. For $100, you can net Moonbot Mardi Gras beads (festive!) and a few Moonbot pocket-sized sketchbooks.

For big spenders: $300 grabs you a “Goodie Bag” full of Moonbot swag. For $500, you can get a signed art book and art card. For $1000, you’ll get your own clay Golem figurine (probably will not come to life). And for $10,000, you’ll be immortalized as an in-game statue in Prague, plus you’ll get dinner with the team (flight and hotel not included).

Ready to go Golem? Visit the Kickstarter page for The Golem!

Games We Can’t Wait To Play: Shadowgate, The Witness, and more!