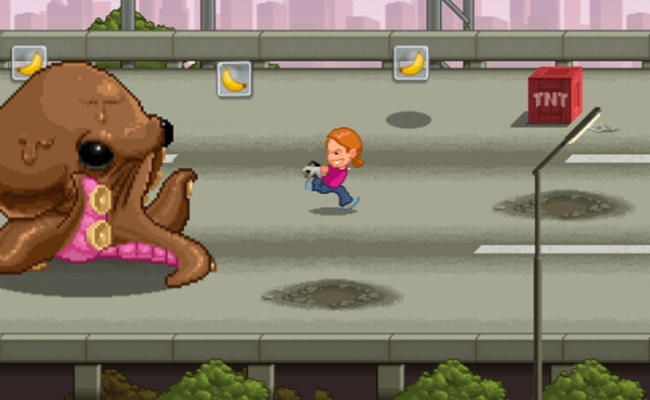 The thing about most video games is that they’re a known quantity. When you fire up Super Mario Bros., you know you’re going to get a 2D platformer with Goombas, warp pipes, and that jerk Lakitu dropping spiked turtles on you. There’s nothing wrong with that, necessarily, but it isn’t how GameTron 1000 rolls. It has the ability to randomly generate games across a wide variety of genres, making no two experiences with it the same.

Absurd as that may sound, it’s actually a pretty straightforward concept. There’s an in-game reel featuring options like characters, enemies, genres, objectives, and more. Once the reel has been spun, you’re thrown into a bite-sized game featuring everything that was selected. It could be an endless faller with shoot-’em-up mechanics, a platformer featuring malevolent octopi, or even an arena battle that pits you against a coffee mug – the game is your virtual oyster!

The most interesting part about GameTron 1000, though, is the role players can have in its development. The creators currently have a Kickstarter campaign, and backers have the ability to submit concepts for in-game collectables, boss characters, NPCs, environments, playable characters, and more. If you have any concerns about user input making the game too weird, there’s a T. Rex dressed like a pirate on the Kickstarter page, so, too late.

Now, despite all these crazy dinosaurs and wacky games, there’s something of a method to GameTron 1000‘s madness. Each game you generate also generates a random name, and if you like it enough, you can choose to turn it into a virtual cartridge and place it on your also-virtual shelf. And if you’re the sharing type, the game will also let you share games with friends and compete against them for high scores. Because sharing is caring, and winning is… Okay, I can’t think of a good word that rhymes with winning. 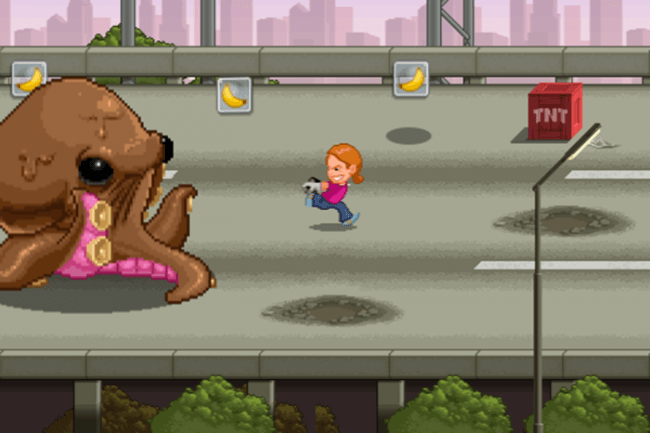 Developer Mojo Bones is seeking £90,000 for the project, and with 18 days to go, it seems they have a pretty solid chance of making it. If it looks like something you’d be interested in supporting, you’ll be happy to know that, amongst the aforementioned rewards, you can also end up with an art book, a physical certificate stating you backed the game, access to the beta, and more. Also, with a decent amount of the legwork already done, there doesn’t seem to be much of a risk associated with backing the game. Yay for certainty!