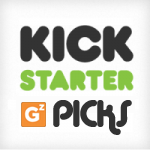 Whether you’re a gaming purist or not, there’s no denying the numbers: the iOS platform is the world’s most popular platform for playing videogames. Most hardcore gamers shrug this statement off with a few of their own, claiming things like “iOS can’t deliver real immersive experiences on that small screen” and “touch screen controls are severely limiting”.

Cascadia Games is working on a solution to both of these problems. Introducing the GameDock, one of the coolest pieces of iOS tech we’ve seen on a Kickstarter yet.

The concept behind the GameDock is a combination of two pieces of technology: screen sharing and a USB controller. The dock and controllers, configured to look reminiscent of an old-school Nintendo controller, aim to make iOS a more authentic experience by allowing you to play games on your TV, while also controlling them via a 2-button controller device.

Essentially, the device aims to turn your handheld iOS system into a console. Currently, it’s being built with a focus on the 2-button controller, making it compatible with several established iCade-ready titles,

The technology, which has been prototyped several times and updated to its new, cleaner design, will only be affordable if it can be purchased in bulk. Kickstarter, lead the way! Cascadia is seeking $50,000 to help upstart the cost for mass-producing this nifty machine.

Pledges of $10 or more will get a free download code for the iOS, Mac, and PC title Cavorite, exclusively programmed to work with the GameDock. $150 gets you the GameDock, one NES-style USB controller, and an HDMI adapter to connect to a TV. Bigger rewards include better deals for buying multiple GameDocks at once, and even an opportunity to program your own game for the GameDock itself.

If you love gaming on iOS, but just wish there was a way to make things a little bigger, GameDock is the Kickstarter for you.