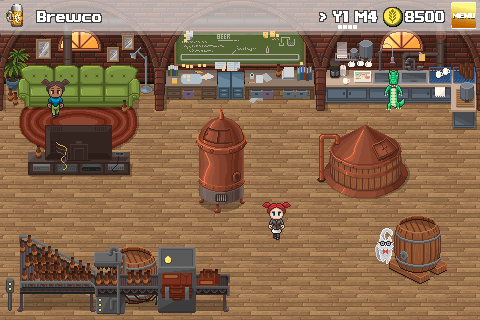 You may not be able to swim in the beer tanks like in that one episode of Family Guy, but owning your own brewery still seems like it would be a pretty sweet gig. Bit By Bit Studios wants to help you find out exactly how sweet with Fiz: The Brewery Management Game. Take the fight to Bud, Miller Lite, and any other beer that wants some on your iOS or Android phone this June.

Bit By Bit founder Sean Sanders says one of the goals of Fiz is to highlight the fun parts of brewing your own suds while eliminating the tedious chore of waiting for your work to bear fruit. Waiting several days for a batch of beer? Yeah, no thanks. The game will keep things moving by reducing the brewing process to a couple of minutes and then moving on to the good stuff.

The next step is using your beer, and as it turns out, that isn’t a euphemism for drinking it. Since the gameplay was inspired by classics like Lemonade Stand and the Tycoon titles, you’ll get to take your beer to market, doing research to find out how to price it just right. You’ll also be able to enter your brew in competitions, snatching blue ribbons away from those haughty imports and earning cash and special recipes.

To make better beer, you’ll have to upgrade your equipment and the employees who operate it. From the looks of things, those employees won’t be limited to the order of primates either. Since the graphics are delightfully old school, it only makes sense for the game to be playful when it comes to your workers.

And if you feel compelled to change things up, Fiz will offer over 100 beer recipes for you to take advantage of. Bit By Bit is also aiming to up the replay value by introducing elements of randomness that keep you on your toes even after you fancy yourself a brewmaster. There will be cosmetic items and speed ups available as in-app purchases, but nothing that lends the unpleasant “pay to win” stench.

It won’t be last call if the Kickstarter reaches its stated goal either, because the studio has some nifty stretch goals in mind as well. These include tablet, Mac and PC versions, beefier production values and expanded content. And of course, more beer.

Kind of makes you thirsty just thinking about it. If you pledge responsibly, you’ll be able to use Fiz to brew up some fun this summer. Cheers!