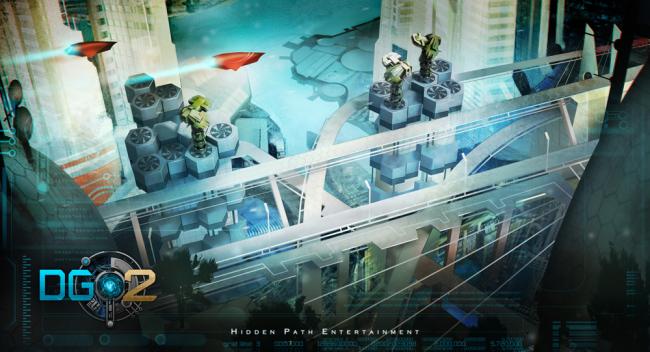 When I say I love Hidden Path’s quintessential strategy title Defense Grid, I mean it. Seriously. Don’t threaten me with the age old “why don’t you marry it already?” because I just might. This is the kind of game that prompts famous figures like Magic: The Gathering creator Richard Garfield to proclaim in a video promoting its sequel that he “needs more Defense Grid.” Oh yeah, I forgot to mention. There might be a Defense Grid sequel!

So, what’s my adoration all about? You see, the original Defense Grid is arguably the tower defense genre’s crowning jewel. A title with tons of depth, whose narrative hook of an interstellar human war against invading aliens proved to be a fertile ground for gameplay worthy of old-school glory. All at once a gateway drug for strategy newcomers, and a world in which grizzled vets could obsess over stats and detail, the game seemingly had it all.  Full voiced narration. Tower choices which affected the route of incoming enemies. Just not a follow-up.

And so it is that Hidden path is taking to Kickstarter to deliver a sequel that’s bigger, better, and fuller of alien destruction than the first. The catch? They claim the undertaking will cost $1M more than they’re currently able to self-finance. As a result, they’re looking to rally fan support to make DG2 a reality. Interestingly, however, they’re not approaching it from the typical “give us money and we’ll make a game” angle.

Rather, the initial funding goal is set at $250,000, and Hidden Path promises to deliver new content for every pot of $250,000 they can raise. Initially, this will take the form of an 8 level expansion entitled Defense Grid: Containment, which bridges the gap between the end of the first title and the beginning of the second. From then on, players will see multiplayer mode and the DG2 graphics engine added to Defense Grid, a multiplatform release complete with a level editor, and – finally – a 20-mission, full-on sequel. Defense Grid 2, realized.

Besides the pleasure of knowing my hunger for more Defense Grid is that much closer to being sated, Hidden Path has a host of rewards available for different tiers of support. Beginning at $15, backers will get access to a copy of the original title (before funding even closes), as well as future access to all successfully funded Defense Grid content.

For the more dedicated, there are notable prizes at $150, $225, and $325 levels, including an 8GB tower-themed USB drive, a Razer Naga Hex gaming mouse, and Radeon Graphics cards in ascending awesomeness. But truthfully, I suggest you check out the list by yourself, as this is perhaps one of the most earnest and packed list of rewards I’ve seen yet (including a $1,000 phone message recoding by the game’s main character Fletcher, and a $10,000 private studio tour to see the game pre-beta).

At an ambitious goal of $1M – especially one set so high after the statistical decline that occurs when a project meets its funding – it’s hard to say for sure if Defense Grid 2 will be met with rousing success, or Kickstarter fatigue. With the $15 pledge getting you access to everything DG from the past on out, however, I heartily recommend pledging… if only to play a great tower defense title.