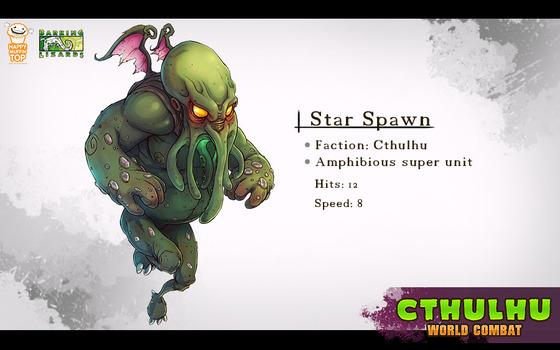 Are you familiar with those shows where people dive into the sea in search of treasure? They’re boring a lot of the time, but I always watch in the hopes that they’ll accidentally uncover Cthulhu. Whether it awoke and wreaked havoc or just netted its discoverers a pretty penny on eBay, it would be amazing television. Until that beautiful day, I’ll be living out my fantasies with the many games that revolve around the infamous deity, such as the upcoming Cthulhu World Combat, labeled as the “next chapter” in the Call of Cthulhu mythos.

For those unaware, Call of Cthulhu is a classic tabletop role-playing game known for its dark tone and clever writing. Sandy Petersen, the game’s designer, has one of the more amazing résumés in the industry, having also worked on Doom, Doom II, Sid Meier’s Pirates!, and more.

But Petersen’s well-established affinity for H.P. Lovecraft was bound to bring him back around to the Cthulhu mythos sooner or later, and that’s why Cthulhu World Combat isn’t such a big surprise. And it isn’t so shocking that it’s being developed for iOS, Android, and Kindle either, given how much turn-based strategy games have thrived on the platforms. I get the feeling Cthulhu is more a Blackberry fan, but you can’t please everyone.

With all of these non-surprises, there must be some kind of unexpected twist, right? Right! Rather than playing as a human on the verge of insanity, Cthulhu World Combat puts you and your friends in the role of alien gods. While that in and of itself is incredibly awesome, the fact that you’re competing to “control the ruins of Earth” makes it all the more exciting.

Petersen has assembled a crew of industry veterans to work on the game, whose combined credits include titles like Age of Empires 3, Tony Hawk’s Pro Skater, and The Elder Scrolls IV: Oblivion. Renowned illustrator Tom Sullivan, who designed the Necronomicon tome for special editions of Evil Dead, has also signed on for the project.

Those who pitch in to the campaign will have a chance to score mugs, signed posters, a custom iPhone case, the game itself, and way more than I could possibly list here. I consider the last of the aforementioned items to be the most exciting, but a Cthulhu coffee mug takes a very close second. Nothing says happiness like drinking out of a cup that features a malevolent alien god.

Petersen and company have written up one of the best Kickstarter campaigns I’ve ever seen, and it’s worth reading it from start to finish. The skinny, though, is that you’ve got 28 days to aid them in their goal of $300,000. And with awesome stretch goals like additional factions, an Xbox Live version of the game, and a freaking physical board game, any dollar helps.

5 Games that Rock the Vote