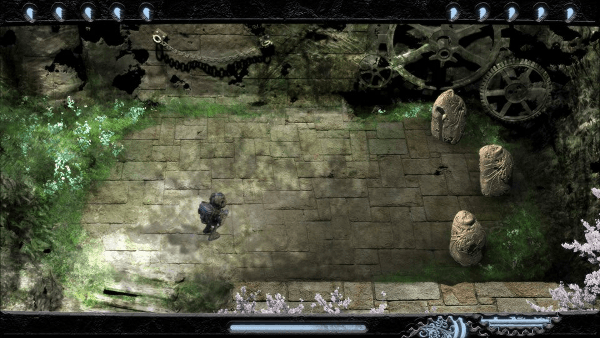 Video games have stories galore about princesses in peril and the heroes that are commissioned to rescue them. You might go so far as to suggest that many games tell love stories. Bloom, an adventure game by Studio Fawn, likewise tells a love story—though it’s the deep, cool love of a mother and her child rather than anything to do with the fiery love between mates.

Bloom is an isometric adventure title that is inspired by The Legend of Zelda. The game features tons of exploration, puzzles, interesting-looking bad guys, hidden secrets, and challenging, imaginative battles. But what really makes Bloom worth a second look are its story-driven game mechanics. Since Bloom is a game about a mother and a child, the two share energy and abilities. Mom can lend her strength to her child, but if something devastating should happen to either one of them, they can suffer heartbreak as well.

Bloom also features soft, eerie visuals that lend the project a grown-up storybook atmosphere. Characters and enemies are highly detailed, and the entire game exudes a lonely but whimsical atmosphere.

Not convinced? Jenova Chen, the designer behind the gorgeous indie games Flower and Journey, praised the potential of Bloom when he saw the game in an episode of The Next Game Boss. God of War‘s David Jaffe and game journalist/actress Lisa Foiles likewise praised the game’s concept and visuals.

If you want to help make Bloom happen, there are lots of neat rewards you can garner if you pledge. For $15, you can get a DRM-free download of the game on either PC or Mac. For $30, you get the game, plus a digital art book. For $50, you get the prizes on the previous tiers, plus access to a beta of the game. For $80, you get a Bloom USB that’s packed with the game itself, plus other cool Bloom-related bonuses.

There are lots of other prizes, too. Want to help out? Visit the Kickstarter page for Bloom!

Buy 5 select games and save 80% in GOG.com’s latest sale