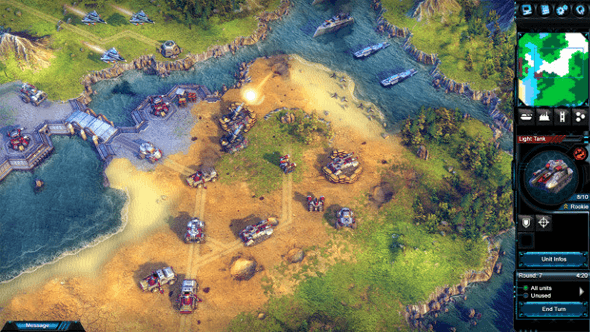 Several years ago, KING Art Games created a prototype for a turn-based strategy game that was eventually left behind as they pursued other projects. One of those projects happened to be The Book of Unwritten Tales, an adventure game that’s as gorgeous as it is entertaining. After that taste of surprising success, the team looked back to its strategy prototype and decided the time was ripe to bring it back to life.

That’s where Battle Worlds: Kronos comes into play. Taking everything that worked well with the early tests, KING Art Games wants to retool the strategy genre to focus on what made games like Advance Wars and Panzer General so great: a heavy focus on tactics, long-term planning, and difficult decisions. Just the way a strategy game should be!

Battle Worlds: Kronos will feature two story-driven single player campaigns, a map editor, challenge levels, strong computer AI, and a live multiplayer mode. In addition, an asynchronous multiplayer feature is being worked on, allowing players to make their moves independently and have the game’s servers keep everything synchronized. A perfect feature for a deep game of strategic plotting such as this one.

Battle Worlds: Kronos is an exciting project, and not just for strategy game fans, either. The team has proven they know what a good game is and that quality will always prevail. No shortcuts are being taken with this release, and the plan outlined on the Kickstarter funding page looks to be as ambitious as it is player-friendly.

The game is currently under development for PC, Mac and Linux systems along with a browser version. The release is scheduled for late 2013.