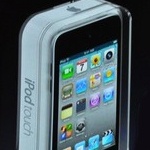 If the iPod Touch is most commonly described as “an iPhone without the Phone,” then the latest iPod Touch could easily be described as “iPhone 4 without the iPhone.” Everything that you’ve come to know and love about the 4, from the A4 chip and retina display to the dual cameras, HD recording and 3-axis gyro have made their way to the Touch.

Do you need to upgrade from your older iPod Touch for gaming? That’s up to you, but if you’d like some guidance on the subject, we’d be happy to refer you to our discussion on the same question as it relates to the iPhone 4. Sure it’s technically a different device… but come on.