Home / News / Zynga plans to blow up armored truck in Vegas, but they really need to blow up their image

Zynga plans to blow up armored truck in Vegas, but they really need to blow up their image 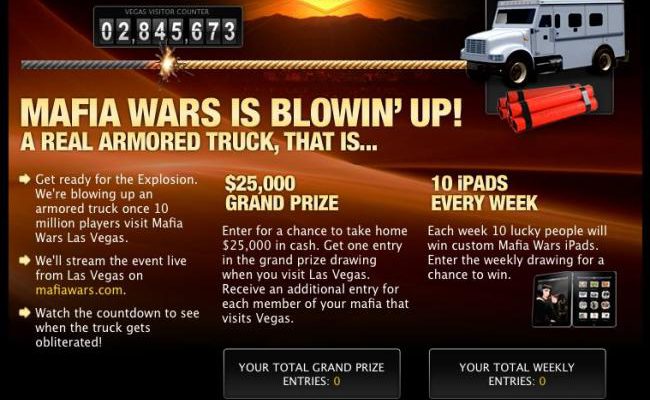 Zynga has launched a clever new promotion to celebrate the launch of Mafia Wars: Las Vegas. According to Games.com, Zynga will blow up an armored truck and stream it online if 10 million users play the game. In addition, Zynga will run a sweepstakes where the grand prize is $25,000 and where they will give away 10 free iPads a week.

Once again, Zynga is far and away light years ahead of its social gaming competition (even Facebook) in its business and marketing strategies. Blowing up a truck in Vegas to celebrate the launch of Mafia Wars Vegas is a clever tie in. They will easily drive 10 million users to the game, much in the same way they drove 2 million + fans through their FarmVille Cows versus Sheep popularity contest (another clever Zynga promotion).

I do wonder, however, if this is the best way to spend their marketing dollars. Zynga’s issue isn’t direct marketing or traffic. Vegas will drive 10 million users no matter what; blowing up a truck may speed things up. 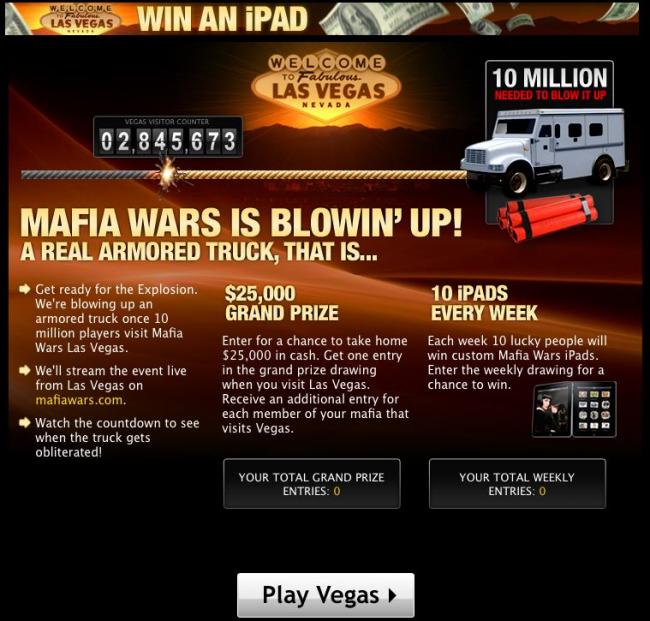 No, Zynga’s issue is its brand and the negative connotation it has the public. No matter how much money Zynga generates for Haiti, people (industry and gamers) still associate Zynga with the sleazy and spammy practices it took to get to number one. Maybe I am jaded because I live in Silicon Valley but even when I talk to gamers outside my 8 Mile zone, they like Zynga for its games but feel the company is dirty.

At some point this will become a big issue for Zynga’s future expansion plans beyond Facebook. Zynga should build out Zynga Live to control their destiny. They have the users and money to do it. But they don’t have the brand. And they definitely do not have the trust factor. If players were paying Zynga directly for credits instead of going through Facebook, would Zynga be making as much money as they are? The answer now is no.

This is an easy fix. Instead of spending all your marketing dollars to blow up armored trucks in Vegas, grow up and launch an marketing branding campaign across TV and Internet. As I have said before, Toyota spent a billion dollars this past year to brand themselves as a quality car company, all the while selling cars with faulty brakes. Zynga should spend a fraction of that to build up its brand and trust with the general public. And hire some more customer care people while you’re at it. When Zynga is a trustworthy enough brand for people to feel comfortable handing their credit cards, then they can launch Zynga Live and that’s when when the real money can come in.

Is blowing up a truck in Vegas a cool marketing idea? The answer is yes. Is it smart? No.

Drilling for sales: An interview with The Oil Blue developer David Galindo