Zynga leads the way with Bitcoin payments for 7 games

By Vanessa Carter | 8 years ago 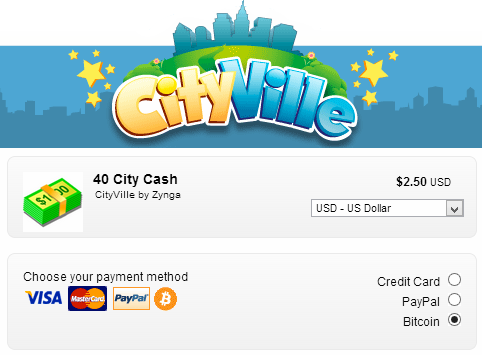 When I put together my Top 10 Predictions for 2014 last week, I actually dropped an 11th prediction — that bitcoin would start to make inroads as a currency for games. Which is a bummer, because had I kept it in there, I would already have proven myself to be an able prognosticator.

The Verge is reporting that Zynga has quietly announced it has added Bitcoin support for seven of its web games.

Starting today you can buy items on Zynga.com in FarmVille 2, CityVille, ChefVille, CoasterVille, CastleVille, Hidden Chronicles and Hidden Shadows with Bitcoins via a test partnership with Bitpay.  Per Zynga’s post on Reddit, they are making this move because they say that Bitcoin is getting too big a payment method to ignore.  Surely the other reason is that it’s a good bit of publicity to start the new year with, and that it positions Zynga as a leader amongst game developers (where it is usually accused of being a follower).

In the comments in Reddit, many developers have posted that there is a lot of interest in adding Bitcoin support to help cut costs as they distribute their games globally.  It makes sense:  one currency used around the world means no transaction or currency costs to worry about across hundreds of countries.

The problem with Bitcoin is that it’s a highly speculative currency, making it easy for billionaires to invest in but hard for game players to justify using to buy an item for $1 (that could cost $5 the next day, based on how high or low it goes.)

Case in point, the Zynga news is credited for pushing the price of Bitcoin from a low of $500 on Dec 19 to $1000/Bitcoin!  The Bitcoin impact on Zynga stock?  Not so much of a jump…

Personally, I think Bitcoin will start to make big inroads with online casino sites. The grey market will move first, as will social and mobile game companies that have web-based versions of their games distributed through their web sites (like Kixeye).