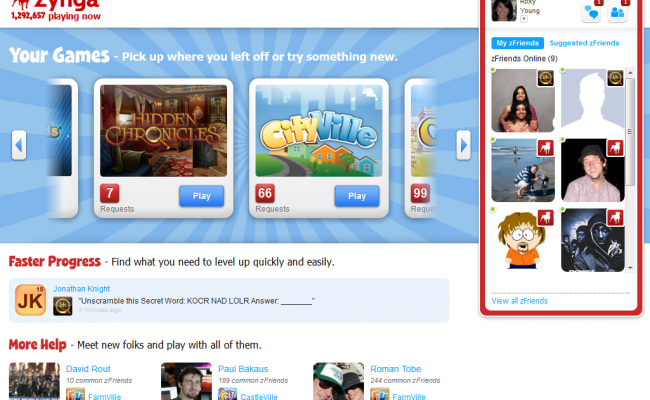 Back in October, Zynga announced an upcoming social platform for games codenamed Project Z. Today Zynga has let us know what players can expect from Project Z – now officially known as Zynga Platform – and it’s a pretty substantial offering. After seeing the service first hand, there seems to be little doubt that Zynga Platform should become an instant hit with both gamers and developers alike.

Launching in beta later this month, Zynga.com will become Zynga’s destination for social gaming. At launch, the service will offer five different games; CastleVille, CityVille, Words With Friends, Hidden Chronicles, and Zynga Poker – all of which will connect seamlessly with your existing game experiences on Facebook. Likewise, at least during the initial stages of the beta, players will be required to use their Facebook accounts to log in to Zynga.com.

In fact, Zynga.com’s connection to Facebook seems to be much stronger than you might expect. When rumours of a Zynga social games network began swirling back in early 2010, it seemed that the reason was so Zynga could move away from their relationship with Facebook. As it turns out, nothing could be further from the truth.

“We have a great partnership and relationship with Facebook, and we see Zynga.com as an extension of that relationship,” Manuel Bronstein, General Manager of Zynga.com told us. “Facebook does a great job building the social graph and we want to go deep into the gaming vertical and do something great for people who love to play games.”

Judging from what we’ve seen, Zynga.com seems like it could live up to that promise – at least as far as social gamers are concerned. The platform seems designed to address a lot of the common complaints that social players have voiced over the years, from finding the right friends to discovering what to play. 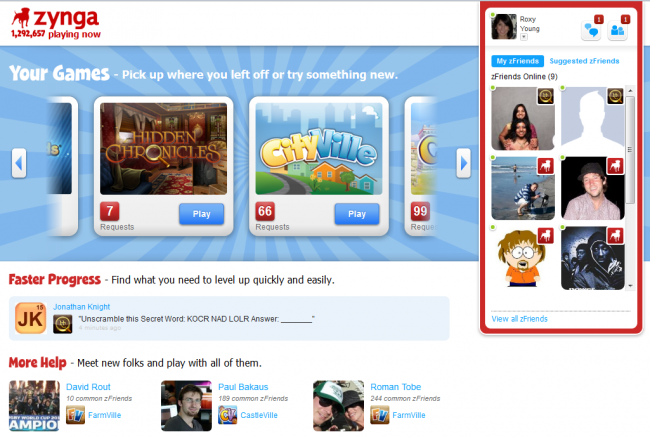 “We see a future, not so distant, in which we can connect a billion people and have them play together,” says Bronstein. “How do we connect those billion people? How do I connect you to the right person to play with? We believe that by having a lot of people playing, and building the right matchmaking tools, we can connect you with the right person and make your gaming experience better.”

These matchmaking tools will try to find new players for you by looking at your existing friends, the games you play, and how much you play them. You’ll then be suggested people who fit with your particular play style. If you play Words With Friends fourteen times a day and are looking for an opponent who does the same thing, the matchmaking may try to pair you up with someone at the same skill level who plays with the same frequency. If you find someone you like, you can add them to your zFriends, allowing you to meet other gamers without having to add a total stranger to your Facebook account.

From what we’ve seen, Zynga.com’s most exciting feature seems to be what they’re calling the “social stream.” Running along the right side of the page, players will see a live feed of in-game requests from other players. Not only does it give you a clear picture of what your friends might need, but switch the filter to “Everybody” and you can see every request that pops up from every player in the game as it happens in real time. What’s more, you can reply to other player’s requests and earn the rewards for it without ever becoming their friends. “If you need 10 permits and a week goes by and you only get 3, that’s not fun,” say Bronstein. The social stream seems like a fantastic solution to this all too common predicament.

And while Zynga.com might be what the industry will see at the player end, the Zynga Platform has a few more surprises up their sleeve too, including one that’s bound to knock your socks off – third-party partnerships. “If we want to connect a billion people to play together, we need great content, says Bronstein. “And yes, we do great games, but there are other developers that do great games out there too.” 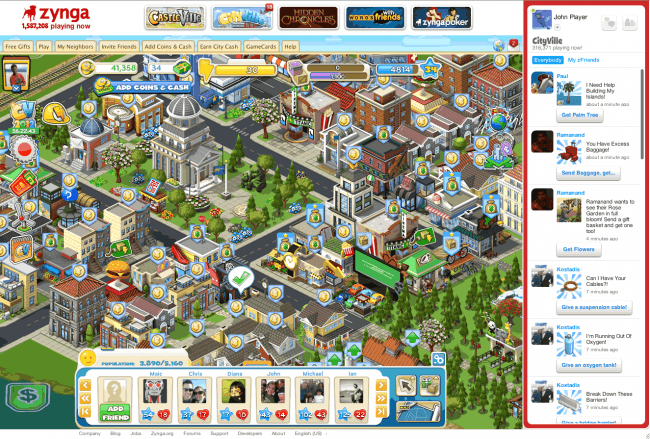 That’s right – Zynga.com will eventually play host to games from non-Zynga developers as well. Early Platform partners include Mob Science, as well as the creators of Gamezebo’s runner-up for Facebook game of the year Woodland Heroes, Row Sham Bow.

“Building a big audience in this space has become increasingly difficult and expensive,” says Row Sham Bow CEO Philip Holt. “It seems like everyone we talk to in the space is complaining about the rising cost of user acquisition.An opportunity to bring Woodland Heroes to the hundreds of millions of Zynga players is an opportunity we could never create on our own.”

And being a Zynga Platform partner is about more than just a larger audience, say Zynga’s Bronstein. It’s about support too. Platform partners will benefit from the same support technology that has helped Zynga’s own titles skyrocket to success.

“Scaling a game from a thousand users to a hundred thousand users to a million users isn’t that trivial,” says Bronstein,” and we have been able to do that for our own games in a matter of days and weeks. Doing that seamlessly requires some good technology that we have put together, from servers to analytics to payments. What we want to do with third-party developers is give them the opportunity to access an amazing audience and then provide to them the technology and the tools to scale so that they can concentrate on building great games.”

While the technology to bring partners on board remains a closely guarded secret, Zynga plans to open up possibilities for additional game developers later this year when they make Zynga Platform more widely available through an API. If you’re a social developer with something in the works, this definitely seems like one to watch. 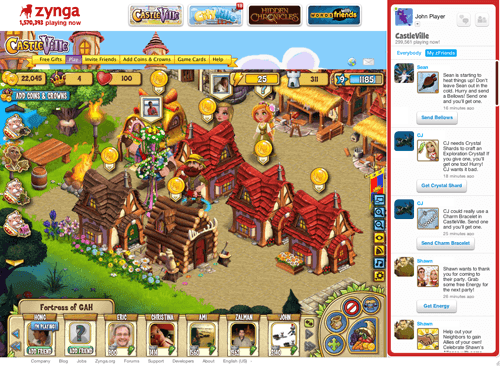 Michael Witz certainly seems on board with the idea. As the CEO of Mob Science, Witz is readying their upcoming KingWorld for market, and was delighted to be given the chance to get their upcoming title on Zynga.com. “As we get closer to taking the game to market, we were faced with a really challenging distribution environment on Facebook,” Witz told us. “Over the last couple of years, Facebook hasclamped down ontheir viral channels, and now, even with an amazing game, you need to have an extremely large marketing budget inorder to build a large audience. After hearing ofZynga’s plans to build a platform dedicated to social gaming, I knewimmediatelythat this is one of those major industry inflection points that changes everything.”

More than just blind excitement, though, Witz seems to have good reasons to believe in the product. “Zynga’s platform solves several problems for developers like us. First, they provide an enormous audience that they can provide access too. Secondly, they are building a space on the Facebook platform where gamers can go and know that they are only going to be playing with other people who like to play games.”

With so many developers looking for outlets outside of Facebook to host their games lately, and top publishers entering into deals to promote smaller developer’s releases, today’s announcement of the Zynga Platform couldn’t have come at a better time. And while Zynga.com won’t be in public beta until later this month, it seems pretty clear that it’s been well worth the wait. Social games have been in desperate need of a game changer to help non-Zynga games get noticed for quite some time now – but who would’ve thought the solution would have come from Zynga?