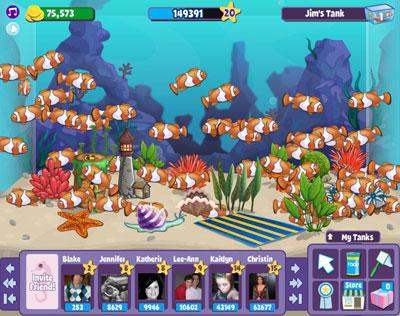 Social games are a strange beast.  Ask any developer, and they’ll tell you that the difference between a retail game and a social game is that “a social game’s development is never done.”  And it’s true – games are maintained, tweaked, improved upon, and updated constantly to keep players engaged and ready to spend.  But what happens when those players stop coming back, no matter how hard you try?  Well… I suppose that’s when a social games development does come to an end.  And for Zynga, two such titles will be going out to pasture soon.

Both FishVille and Treasure Isle will be closed in the coming months, and considering the number of people playing each, it’s not hard to see why.  According to the latest stats on AppData, FishVille has 730,000 monthly active users (MAU), while Treasure Isle has only 540,000.  For a smaller developer on Facebook, these numbers might be seen as something of a hit – but for Zynga, whose game collectively have more than 300 million MAU, it’s probably hard to justify the cost in keeping these aging dinosaurs of the social scene running.

Regardless of why this happened, just the fact that it did happen provides an interesting look at how the market responds to social genre trends.  At one point, social aquarium games were one of the top genres on Facebook – and FishVille was the biggest fish in the sea, so to speak.  But that went away a long time ago and hasn’t shown any signs of resurfacing.  So Zynga had to ask themselves – do we kill FishVille, or try to bring the genre back by developing FishVille 2?

While they may have chosen the former, don’t think that choosing the latter was so far-fetched a possibility.  After all, restaurant games were dead and buried for ages, but Zynga decided to bank on revitalizing the formula with ChefVille – and it’s now the #4 game on Facebook.  So what made them decide to breathe life into one dead genre, but not another?  It’s an interesting question.

Games.com are reporting that FishVille and Treasure Isle are only two of 13 games that Zynga plans to close in the coming months, but there’s no word on what the remaining 11 might be.  If I were to hazard a guess, I’d think that most of these would be in the world of Zynga Mobile (where some of their games are getting a paltry 20,000 MAU by comparison) – but this is purely speculation on my part.

As a thank you to players of FishVille and Treasure Isle, Zynga’s offering a one time “complimentary bonus package” that can be used in CastleVille, ChefVille, FarmVille 2, Mafia Wars or YoVille before December 5th.  Why not Mafia Wars 2 or The Ville, the spiritual successor to YoVille?  Good question.  Considering Mafia Wars 2 has even less MAU than the games they announced today (340,000), and The Ville seems embroiled in a legal battle with EA, the writing may very well be on the wall.

Free Games and Sales: Return to Ravenhearst, Populous and more!