By Fatima Punzalan | 13 years ago 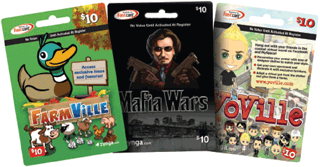 Facebook gamers who aren’t comfortable using their credit cards for in-game purchases will now have an alternative method of payment in select Zynga games. Pre-paid game cards for FarmVille, Mafia Wars and YoVille are now available at major US retailers.

By offering retail-based game cards, not only will Zynga be opening up their virtual marketplace to those unwilling and unable to use a credit card, but they’ll be able to reach the gift-giving market as well. With more than 80 million monthly players, I think we all know someone that would love a $10 FarmVille game card in their stocking next Christmas.

Zynga game cards will be available at 7-Eleven, Target, Best Buy and GameStop, with availability varying by retailer and location. Players will be able to redeem these cards directly on Facebook as well as on Farmville.com, MafiaWars.com and YoVille.com. For more details or to locate a retailer near you, visit zynga.com.