Jane Jensen is coming back to adventure games [interview] 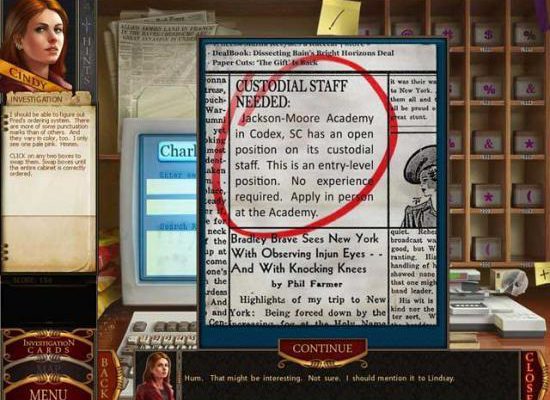 There are only a handful of game designers who can really be called a master of their trade, but as the mind behind the classic Gabriel Knight graphic adventures in the 90’s, Jane Jensen is unquestionably amongst them. Over the last decade she’s spent a fair bit of time creating hidden object games with Oberon Media, a company she co-founded, but as of this morning Jensen has announced a plan to return to her roots.

Jensen and her husband, composer Robert Holmes, have just announced the formation of Pinkerton Road, a new game studio devoted to the development of adventure games with deep and compelling stories for the PC, iPad, and Android tablets. We recently had a chance to chat with Jane about her return to adventure games, what she’s learned from her time in the casual market, Pinkerton Road’s unique subscription model, and everything in between. Here’s what she had to say;

What prompted your decision to return to adventure game design?

I’ve always been an adventure game designer at heart, and I tried to incorporate as much of that as constraints allowed into my hidden object games. But when I started seriously looking at the possibility of creating a game studio myself, where I could do whatever I wanted — well, what I really wanted was to make adventure games again. And it’s the perfect time to do it. I think the casual market is ready for meatier material and I think third person adventure games will be a kind of revelation after all the first person HOGs. And adventure games have been making a comeback in the mainstream market as well. It’s the right time and I think there’s a void of a certain kind of dark and dramatic adventure game that we can fill.

While you’ll be returning to adventure games with your new studio, you’ve spent a good portion of the last few years developing hidden object games with Oberon Media (which you co-founded). Having spent so much time with the hidden object genre, are there any lessons that you’ll be carrying forward?

Yes, there are valuable things that I learned working in casual games that I’ll carry forward. That sense of dazzle and frequent reward, flow and ease. I hope to keep the things I love about adventure games — great story and characters, exploring a unique world, puzzle-solving — without bringing back some of the less desirable traits like frequent deaths without save games, pixel hunting and wandering aimlessly trying to figure out what to do.

Some of the games you were responsible for in recent years had some pretty famous authors attached to them, from Agatha Christie: Death on the Nile to James Patterson’s Women’s Murder Club series and Charlene Harris’ Dying for Daylight. As a writer yourself, what was it like playing with the properties of other creators?

I’ve always been a big Christie fan and Anglophile, so it was great fun to take a few of her best stories and work them into a game design. It was a pleasure to meet James Patterson — he’s an enormously successful author and an insanely productive brand machine. And Charlaine Harris was a total sweetheart to us. I was still able to write a lot of the material for those games and it was creatively fulfilling. I wouldn’t trade any of it. But still, I was glad to get the opportunity to do original games on occasion at Oberon as well, like Deadtime Stories and Dr. Lynch: Grave Secrets. 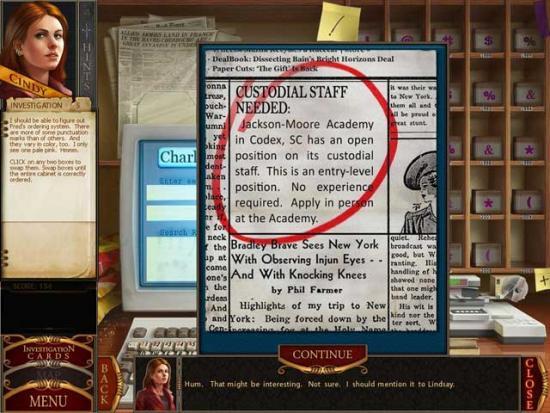 You’re primarily known for your exceptional storytelling skills, yet hidden object games are typically identified more with visual rather than narrative-based gameplay. How did you approach this as a designer? What was your process like?

All of my hidden object games had a lot of story in them. I usually sit down first and write out ‘what really happened’ (especially with a mystery). And then I break that up into small nuggets of info and figure out where to put those nuggets in the game so that the player can find them and piece together the story. With hidden object, I always tried to incorporate as many real story clues into the hidden object scenes and mini-games as I could — newspaper articles, birth certificates, what have you. For example, in Women’s Murder Club: Shades of Gray, you found 12 strips of paper from a shredded letter in a hidden object scene – and then had a mini-game to piece them together. The result is that you got to read a letter that was an important clue in the story.

You’ve recently worked with Zynga to develop their first foray into hidden object games, Hidden Chronicles. Can you tell us a bit about how that collaboration came about? What did you think of the experience?

Cara Ely was Creative Director for that game and we were both game designers/directors at Oberon. She called me in to help with some narrative writing. But the main writer on Hidden Chronicles was Christy Marx, another terrific Sierra designer. I’ve been more involved with the writing of another Zynga project (not yet announced). Zynga is a vast creative machine and it’s been a real education working with them. I had never worked on social games of that level before.

Speaking of bringing fresh genres to Facebook, do you think there’s any potential for narrative-based genres like graphic adventures to somehow make the transition to free-to-play social platforms?

That is intriguing, isn’t it? The short answer is it must be possible, but I haven’t tried to figure it out yet. If I do you’ll be the first to know! 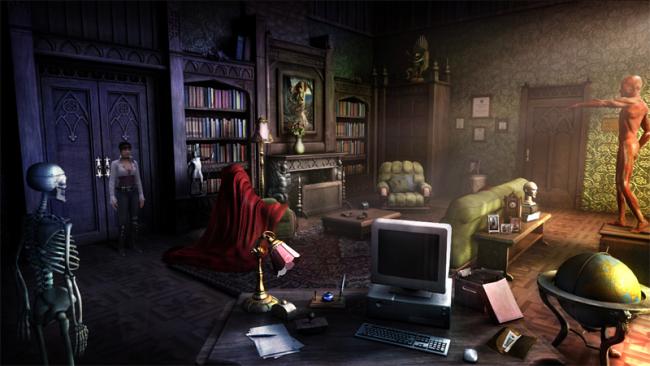 Though it was first announced in 2003, your last graphic adventure was 2011’s Gray Matter. What caused the delay?

It switched publishers at one point and then later development teams. I was not as involved on the production of that game as I’ve had the blessing to be on most games in my career. I definitely prefer to direct a game myself and be very involved with it all the way through. And that is one of the reasons why I decided to start my own studio.

One of your previous hidden object releases, Dying for Daylight, was released episodically. This is a format we’re seeing more and more of nowadays, and it’s been employed in graphic adventures with some notable success. Are there any plans to explore this style of distribution again with your latest venture?

I haven’t ruled it out. But for PC I think it’s just as successful to release a single premium title. And for tablet, the ‘free’ model where you download the game for free, can play a certain amount of it, then have a purchase moment, rather like the way iBooks work to give you a ‘sample’, may be preferable to true episodic.

There have been plenty of great adventure games over the last few years. Are there any that stood out as exceptional in your eyes?

I like Telltale Games’ Hector and Puzzle Agent and I’m a fan of the MCF series. I just downloaded Yesterday — the art and concept is intriguing but I haven’t played it yet. I liked Indigo Prophecy a lot. 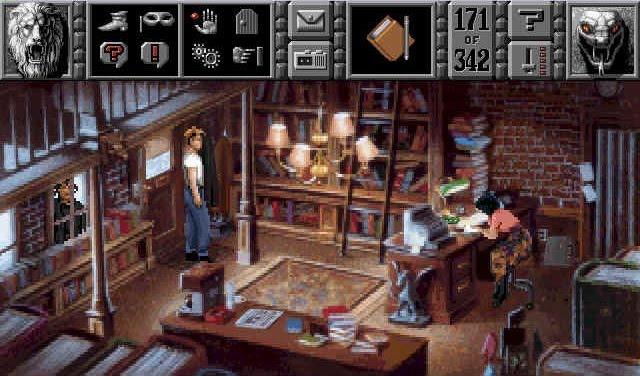 Old school adventure gamers will always remember you as the developer behind the Gabriel Knight series. What are the chances that we might see it return? Would you want to make Gabriel Knight 4?

Yes, I would definitely like to, and I think there’s a better chance than ever before that that could happen. Adventure games are making something of a comeback, and now that I will be working for myself, I’ll be able to pursue the matter with more focus. We’ll see!

Are there any games that you wish you could go back and flesh out more?

I would have liked to have finished the story in Dying for Daylight! I intended a fast sequel, but that didn’t happen. Deadtime Stories would make a great, longer adventure game series. 😉

What is your new studio’s first project going to be, and when can players expect it?

We’re actually going to let players decide! We came up with an idea for our studio called CSG — Community Support Gaming. It’s based on CSAs (Community Supported Agriculture) in organic farming — where customers subscribe to a small organic farm and get a fresh basket of produce each week. With our studio, you can become a CSG member and you get all the games we make for a year as well as monthly video updates on our projects in development, sneak peeks at art and puzzles and be able to alpha and beta test. (Of course the games will also sell through the regular channels.) 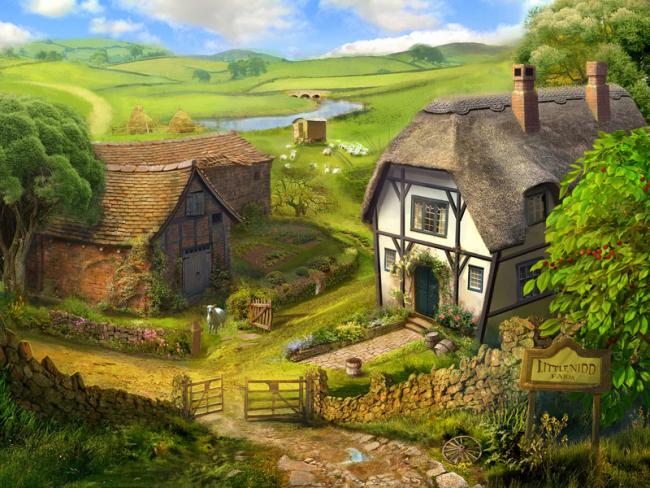 We’re running a Kickstarter campaign for our first CSG season and we’re showing 3 concepts — we’re going to let people vote on which concept they want to see us develop as our first studio game. Gray Matter 2 is one of them, and there are 2 brand new concepts. We hope to ship our first adventure game around March 2013.

While games are like children to their designers making it impossible to pick a favorite, we’re going to ask you to anyway. Which of your games is your favorite and why?

Man, that is brutal! I’d have to say, if we’re talking about story it would be Gabriel Knight: The Beast Within. If art style, Gray Matter. I don’t think I can narrow it down any further than that without mental injury.