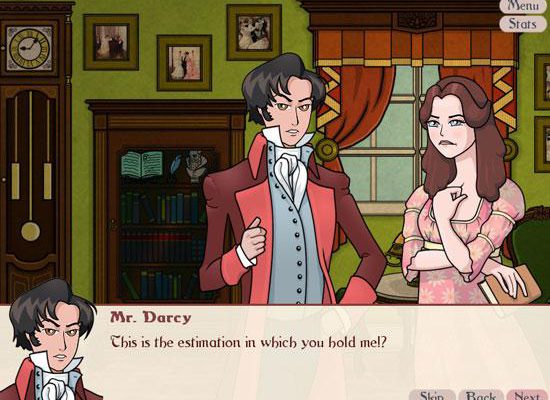 Visual novels tend to focus on the complex relationships of their main characters, so what better inspiration could there be than the romance-laced novels of Jane Austen? Reflexive Arcade’s Matches & Matrimony adapts not just one but three Jane Austen classics into a visual novel designed to appeal to casual gamers. Gamezebo learned more about the design process in a conversation with Reflexive Arcade’s Russell Carroll.

After developing time management games like Airport Mania, match-3s like Simplz: Zoo, and hidden object games like Wispa Forest, what inspired you to make a visual novel?

Matches & Matrimony really owns its inspiration to the source material. I’m a big fan of the works of Jane Austen. I find her writing to be uplifting, and in our modern day world where there are so many games and movies that feel dark and dreary, I was excited at the chance to do something that wasn’t just light and happy, but also that personally affected me. Readingher booksalways makes me more thoughtful,appreciative and kinder towards the people around me. It’s a daunting goal, but a big inspiration for the making the gamewas my hope of somehow sharing that feeling. 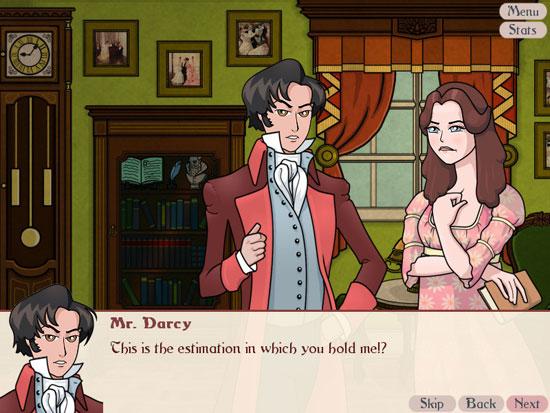 Matches & Matrimony combines elements from three Jane Austen novels. Why did you choose those particular novels?

When I first started thinking about doing Matches & Matrimony I wanted there to be real consequences for the choices you made. I didn’t want it to be Choose Your Own Adventure style where you either chose correctly or your story ended. I wanted you to really be able to have different stories.

To do that I needed a lot of material, and using multiple novels was the key to doing that. I picked the three novels I used, Pride & Prejudice, Persuasion, and Sense & Sensibility not only because they were my favorites, but also because of the overlaps I sawbetween them. Those overlaps provided additional text that could be used in the game.For instance I combined Willoughby and Wickham in the game, which provided two books worth of material to draw upon for one character. Using multiple books that I loved and that I felt overlapped made it easier to put the game together.

Matches & Matrimony starts out exactly like the novels, but eventually deviates from that plotline as the player makes certain choices. Why was it important for the game’s story to deviate from the established version?

If the game was just like the book Pride & Prejudice, then it would be better to read the book. I love the book, and the movies, especially the BBC version, but in making a Jane Austen game I wanted to create something that you couldn’t get elsewhere.

One of the great things about video games is that they allow youto manipulate the world around you. You can explore the space and see what other people have created for you, much like a book or movie, but you can also change the space a little and make it your own. I wanted Matches & Matrimony to let players express themselves and twist the storylines around so that they felt like the storyline was reallytheir storyline.

It’s been fun talking to players who’ve played the game, and I find thatthey often, without evenrealizing it,they willrefer to their in-game character by name as though their character were an actual character from a book thatwe’d both read.That sense of connection the player gets to their storyline is only possible in video games and necessitated some deviation from the original stories. 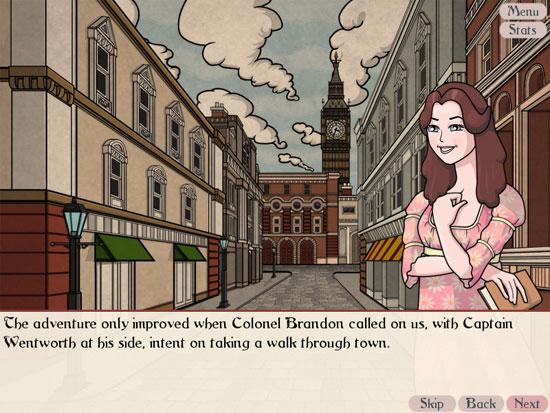 What were some of the challenges you faced in developing Matches & Matrimony?

There were a lot of challenges in developing the game. Figuring out locations and scenes that could serve for different characters and storylines was a huge challenge, as was the overall flow of the game. On the game’s website there are flow-charts that show how, for the most part, each individual chapter progresses. It’s perhaps interesting to note, that I didn’t actually make those flow-charts for fans. I made them for myself as keeping track of all the options available and how they impacted each other was really a challenge stay on top of. While developing the game I put together MANY different spreadsheets and charts that each considered the story from adifferent angle, such as by characteror by attribute,so that I could keep track of the storylines as I outlined and then wrote the game.

However, the biggest challenge was the “What if?” scenario.In doing the game I neededadditional paths, conversationsand storylines beyond those provided by thethree Jane Austen novels. I needed to combine the storylines from those novels of course, but the biggest challenge was figuring outthe newstorylines, and every single piece of conversation that was in the game, but not in the novels.

Jane Austen never wrote the “What if?” scenario. I had to consider:What if Elizabeth fell for Mr. Bingley? Or what if she never met Mr. Wickham? What ifshe fell for someone from an entirely different book, likeColonel Brandon from Sense & Sensibility? I had alot of creative freedom in writing these scenarios, which was great, but also some terror as I needed to make it feel real to the world of Jane Austen. In doing them, I tried to pull as many conversations as possible directly from the books, and adapted them as seemed to make sense.

Each of the “What if?” scenarios had to be carefully thought out in the game, and they also had to fit back into the whole of the story. If every decision the player made led to a completely different story, then I would have had to write hundreds of stories, and it probably would have taken my entire life to finish writing it!

Instead of writing hundreds of storylines, I worked to combine all of the different paths that could be taken back into the whole of the story. There are points in nearly every chapterwhere the storylines diverge into parallel paths, but by the end ofeach chapter I try to bring the paths back together. Still, evendoing that, there are so many different little avenues that you can walk down in the game that honestly I expect most players won’t ever see at least25%of the text that I wrote.

However, that’s not necessarily a bad thing. It means that there is a lot more behind the cover than may, at first, be obvious to the player. My hope is that players will find on repeat plays that the value of the game really shines as it continues to take unexpected turns. It was a challenge to try and tie everything together and write all the snip-its ofconversationand even completely new storylines that weren’t ever written or perhaps even considered by Miss Austen, but it was an interesting challenge and one that, when it didn’t leave me with a pounding headache, I really enjoyed. 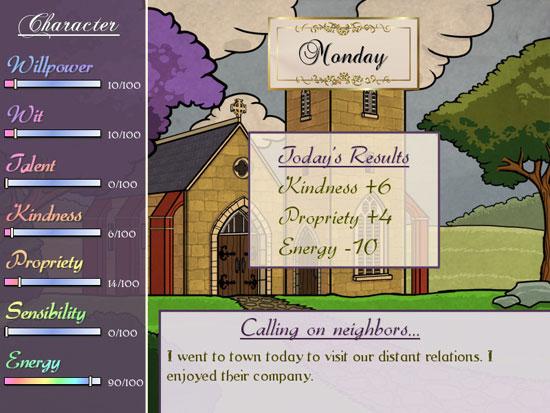 What aspects of the game are you most proud of?

I’m definitely most proud of the writing. It was a crazy thing to undertake the game as I had to personally write a great deal of the story and text. That was daunting enough, but what I wrote had to also mix with what Jane Austen had written so that players wouldn’t feel that it was jarring to jump from her text to mine. Trying to mesh my writing style with one of the world’s most famous was an insane thing to try and do. Often while working on the game I would go home to my wife and say “I have no idea what I was thinking! Why in world did I think I could pull this off?”

However, for all the toil and pain in putting it together I am very pleased with the finished product. The game has nearly 150,000 words in it, which equates to about 375 pages of text. There are a lot of personal moments that Iput into the text, which puts this game a lot closer to my heart than most.I’ve been really happy so many people have spoken so positively of it. I’m really proud of the game’s text and hope it will appeal to anyone who is a fan of Jane Austen, and hopefully would be fans as well.

Any plans to develop more visual novels? If so, can you give us any sneak peeks?

As a game studio we’re always thinking about new ways to delight and surprise our fans. We make games for a variety of platforms, including the Kindle, which naturally lends itself to visual novels. In fact, we’ve already released a more graphical sort of visual novel on the Kindle called Dusk World. Though I can’t let you in on any of the secret details, I can say we’replanning more visual novels being released on that platform in the future!

I’ve really appreciated all the kind remarks about Matches & Matrimony. When it was released I was both excited and nervous about how people would respond to something that was so different from the typical casual game. No game is for everyone, but I was very pleased that so many people gave this game a chance, and that so many of those have enjoyed it have been outspoken in their support. There is nothing better in game developmentthan making a game and seeing people really enjoy it. I feel blessed to have been able to create this game, and grateful to the fans who have so positively received something that was very different from the more typical game that theymight have been expecting.