Jail-breaking your iPhone is now legal in the US 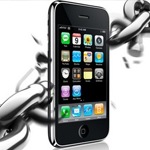 When the iPhone first launched back in 2007, gamers looking to get their fix had to rely on some questionably legal methods. “Jail-breaking,” the method in which iPhones can be hacked to allow apps not approved by Apple to run on the device, is almost as old as the iPhone itself. Apple has steadfastly stated that doing so was unlawful. As it turns out, they’re wrong.

Wired.com is reporting that a decision reached by Federal regulators clarifies that jail-breaking does not constitute a violation of the Digital Millenium Copyright Act. The Act, passed in 1998, criminalizes products and services intended to circumvent DRM that exist to protect copyrighted work.

Apple has argued that the DMCA protects the encryption built into the iPhone’s bootloader, which jail-breaking circumvents. The Electronic Frontier Foundation, a non-profit digital rights advocacy group, disagreed. 19 months ago the EFF decided to file that disagreement in writing, sending a request asking to have jail-breaking added to a list of DMCA exemptions. The verdict was published in a report (available online courtesy of Wired.com) that clarifies the legality of the situation. It’s official: jailbreaking now has a legal thumbs up.

So what does this mean for iPhone owners? And more importantly, what does it mean for gaming?

Very little, I’m afraid. While the legality of jail-breaking has now been clarified, it does very little to change the situation from the consumer end. Apple may have insisted that it was a criminal act, but they’ve never actually prosecuted someone for jail-breaking their phone – so the risk remains largely the same. And since Apple isn’t required to allow jail-breaking, simply unable to prosecute those who do, the penalties for doing so remain unchanged as well. Jail-breaking still violates Apple’s Software License Agreement, which means Apple will no longer have any responsibilities to you as a consumer if you do jail-break your phone.

All of this hoopla about jail-breaking wouldn’t be necessary if Apple wasn’t so insistent on keeping such a tight leash on its platform. The App Store approval process may weed out buggy and problematic software, but it’s also a way to force developers to give Apple a cut of their profits. Developers of jail-broken apps can keep all the money they make. Jail-broken phones are also capable of doing things Apple doesn’t want you to do, like run Adobe Flash, or sync wirelessly.

For gamers looking to get their game on in a jail-broken world, the risk remains largely the same. Just rest easy in knowing that Apple has no legal recourse against you going forward.

Zynga proclaimed Google of Games by New York Times, next up cover of a Rolling Stone