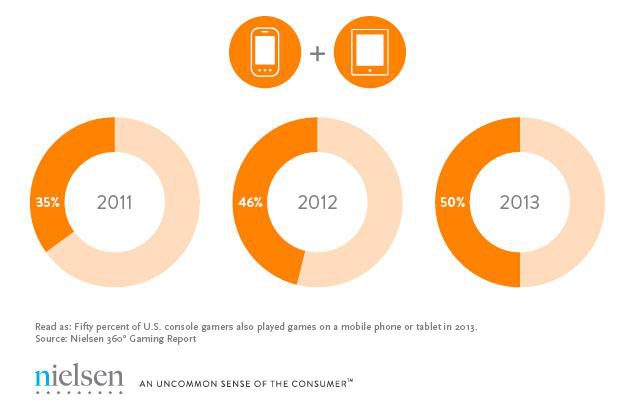 So says a report by the Nielsen company (yes, the same one best known for giving the world TV ratings) released yesterday that tracks the habits of gamers in the U.S. ages 13 and up. It found that gaming on smartphones and tablets made serious strides between 2011 and 2013, which shouldn’t surprise anyone. What was a little more eye-opening was the percentage of people who self-classify as console gamers who also report playing mobile games: 50 percent, up from 35 percent back in 2011.

That doesn’t mean that the negative stigma mobile games have in some corners of the overall gaming community has completely gone away. All it takes is a visit to the right comments section when a beloved console or PC franchise announces a mobile spin-off to prove that. 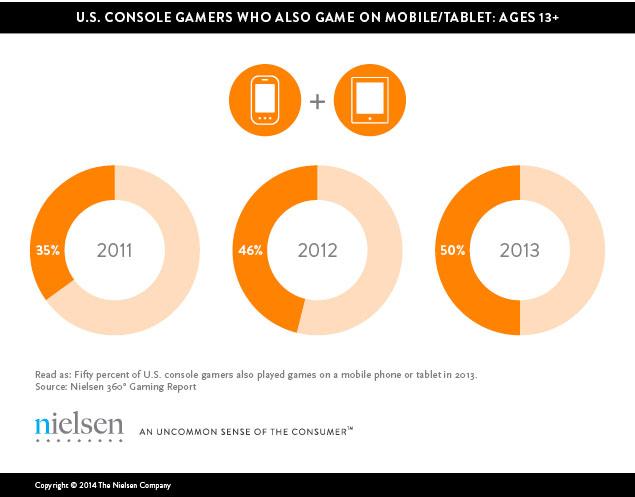 But it is a sign that it’s not all that productive for developers and publishers to continue to lump gamers into easily labeled buckets. Matching gaming experiences to the right platforms will continue to be important, but less time should be spent worrying about whether a specific audience will find and play those games where you deliver them. They will.

The other good news is in the first part of the study, which reveals that the total number of hours each week devoted to video games continues to rise. It’s not a zero sum game if that holds true, and consoles, PCs, handhelds and mobile devices — as well as incoming technologies like the Oculus Rift — can all coexist without cannibalizing each other too much.

In other words, gaming has a multi-platform future. The sooner we all acknowledge that, the better.

Ruzzle has scored a TV deal