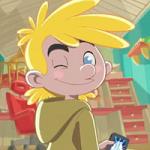 Well that certainly didn’t take long! Hot on the heels of yesterday’s speculation that mobile giant Rovio was looking to purchase the rights to indie physics-puzzler Casey’s Contraptions, the transaction was confirmed by the big bird itself. Goodbye, slingshots and pigs, hello scissors and balloons!

It all started yesterday, when the Angry Birds creators released a video celebrating their billionth download (no big deal, right?). That wasn’t what caught everyone’s attention, however. Couched at the end of the mini-trailer was an all-too familiar blonde boy standing in front of a Rube Goldberg setup mounted on the wall. The cat, it seemed, was out of the bag. But with developer Noel Llopsis of Snappy Touch remaining mum except for a cryptic tweet calling Rovio the “perfect gentleman,” the internet was left to its theorizing.

Until today. In quotes obtained Gamasutra, Rovio’s VP of franchise development Ville Heijari confirmed that the company has purchased the full IP rights for Casey’s Contraptions, and will be rebooting its art (and perhaps play?) style to “enhance it, and… re-introduce it… to an even larger audience.” Says Heijari, “the gameplay is a perfect fit in our arsenal, with its approachable, fun, and highly addictive take on the physics puzzler genre.”

Say what you will about the Zyngas of the world, but I for one couldn’t be happier for Llopsis and and development partner for Casey Miguel A. Friginal. Rovio’s empire – massive though it is – has not changed their status a developer who respects and participates in the independent community, themselves having come from humble beginnings. After all, Angry birds was well past their 50th game!

More importantly, for all it may have been milked, their avian IP is full of rock-solid design choices, clever parodies and homages, and one heck of an adorable set of plushies. And with Rovio now behind the wheel of a series as full of potential for innovation as Casey’s Contraptions, I can’t wait to see what they do with it, and how they add longevity to its special brand of Incredible Machine-style puzzling. And let’s be honest. How awesome would a well-written Casey’s cartoon series be!?