Home / News / Is Wall Street wary that King is going to be a one-hit wonder?

Is Wall Street wary that King is going to be a one-hit wonder? 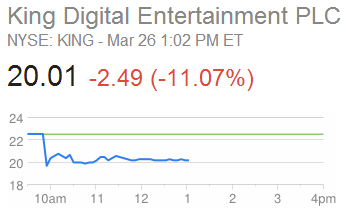 This quote from ever colorful CNBC personality Jim Cramer after King Digital stock began trading on the New York Stock Exchange earlier today should give you a hint:

“It’s a Stephen King horror story,” Cramer said. “It might be Misery, it could be even Cujo.”

While there are plenty more (and better) puns that could be made from comparing the King IPO to the works of the master of horror, it’s clearly not been a good first day for the company best known as the developer of Candy Crush Saga. After pricing its stock at $22.50 a share, King Digital has seen its stock price fall to as low as $19.08 in its first morning of public trading. As I write this, it’s currently at $20.15 a share, down 10.4 percent on the day.

Even if stock market talk sounds like gibberish to you, King’s issue is easy to understand. People in the financial industry are concerned that Candy Crush is as good as it gets, and that the company will never again come up with a title with similar reach or revenue potential.

“We can go through a long list of one-hit wonders, everything from Angry Birds to FarmVille,” financial analyst Tony Wible said to Bloomberg.

The comparison to FarmVille creator Zynga is proving especially tempting. It’s understandable too, as Zynga’s current market value is around $4 billion – down about $3 billion from its own IPO in 2011, which also didn’t go exactly as planned. And despite changing its leadership and shifting its focus to mobile, that company never has regained its lofty status among casual gamers.

King Digital CEO Riccardo Zacconi is doing his best to explain how his company is different.

“I think we’re different because we cracked mobile, not only reach, but monetization, which allows us to buy marketing and be in control of the steering wheel,” he said to Reuters. “We are not reliant on someone featuring us.”

It’s all going to come down to whether or not people keep playing – and spending money on – King’s games. If they do, this less than auspicious debut will be forgotten.

And if they don’t? Then it might be time to start thinking up puns based around Kabam and other mobile game companies thinking about doing their own IPOs.