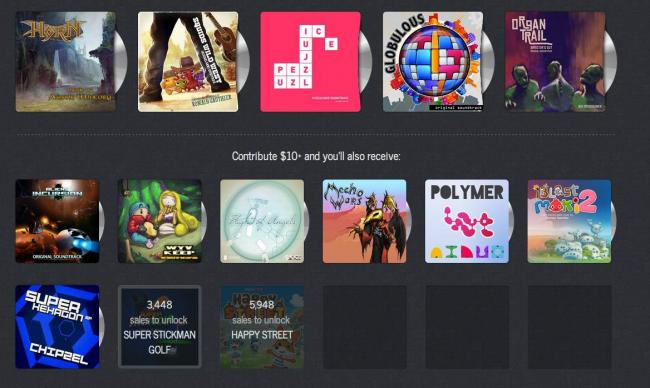 Think of some of the best mobile games this year. Horn. SQUIDS Wild West. Puzzlejuice. These are the kind of games that survive spring (or fall!) cleaning on your device; some of which stood out as our favorites of the summer. What would you pay for a chance to own their soundtracks? Twenty dollars a’ piece? Nine dollars on iTunes? How does one dollar sound, for all of them? And more.

Because making great games wasn’t enough, a cavalcade of awesome indie content creators for iOS have gotten together to present the iGame Music Bundle, a collection of game soundtracks on sale for the “I can’t believe it’s not butter!” price of one dollar. Yes, you read that right. One hundred pennies. For the cost of a chocolate bar in line at the grocery store, you can get your music-lovin’ mitts on the sountracks for Horn, SQUIDS Wild West, Puzzlejuice, and Organ Trail: Director’s Cut. Having downloaded the soundtracks myself, I can attest to how wonderfully zen, moody, and in some cases epic all of this content is.

Moreover, for those willing to up your donation to a full ten dollars – a price which I can only remind you remains lower than the cost of one soundtrack in most cases – you’ll receive seven more full albums. These include highlights like Whitaker Trebella’s serene stylings from Polymer, and Chipzel’s earworm-level chiptunes off of the recently addictive Super Hexagon. All of the music is 100% DRM-free, allowing you to give a friend a taste to encourage them to buy the package, while donations go in part to either the American Cancer Society, or Child’s Play.

As of this writing, there are four days left for you to get your hands on the iGame Music Bundle, which could include even more music as other albums get added in the face of higher sales! At the very least, there are zero reasons left as to why you shouldn’t at least throw in a dollar for five great sountracks. Unless you hate good music, of course.