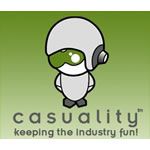 A couple years ago, when I worked at Yahoo! Games, I used to meet once a month for breakfast with the top folks at other major game companies. Ostensibly we were there to discuss forming a trade association for casual games, but to be honest, we ended up achieving little (bummer) and eating a lot free scrumptious omelets (nice). Then about a year ago, Jessica Tams, Vice President, Product Planning at Skilljam / FUN Technologies, launched the Casual Games Association. In the process, she also started Casuality, a conference taking place in Seattle next week for those who create and distribute casual games in both the United States and Europe. Recently I sat down with Jessica to learn more.

Most game developers (even in casual games space) are men. How did you get started developing and producing games?

I was working on my doctorate in physics at the University of Washington when I stumbled upon a booth for Sierra On-line at a summer job fair. Sierra On-line, as you may recall, was the company responsible for creating those old adventure games like King’s Quest and Gabriel Knight, games which defined the non-violent video game genre. It was my only interview-and my only job offer.

I ended up programming core video games for the next five years. Core video games are those games your kids play which most likely involve shooting monsters and bad guys. After thinking about leaving the video games industry for good, I gave casual games a shot and it has stuck. I never did finish that doctorate, by the way.

What are your favorite games to play? What game are you playing right now?

I used to play games in college with my roommates-we played lots of Team Fortress Quake in the computer labs after hours.

My favorite casual game right now is Word Jong. It is a word game for all of us who are not good at word games. Even I am a genius player! My second favorite game is Lego Racers-which, I confess, is the only game I have ever actually purchased.

What is the purpose of the Casual Games Association (CGA)? How does the CGA impact Gamezebo users-that is: people super-addicted to playing casual games?

Our purpose is to bring together developers, publishers and distributors in order to achieve our common goal of growing the global casual games market. I think that suggests three priorities:

1) We want to create better games.

2) We want more super-addicted players to play them.

3) We would like to earn enough to continue to make more games.

If you think about the movie industry, there are associations and a support structure in place to facilitate creative vision and foster success. We want to do the same for casual games. In addition to our serious business initiatives, the CGA is working to keep our association connected and friendly, because we’re convinced that for our industry to truly thrive we have to maintain a spirit of collaboration.

You’ve worked in both the video game side and casual game side of the business. How do the two compare?

Working in the core video game space is very different from the casual space. In casual games, many companies and professionals work across the entire value chain-but in the core gaming space there is a great divide between those who develop and those who publish and distribute the games. As a result, the industry is not especially connected across the value chain. It’s not that there are fewer great people, it’s just that over the years trust has deteriorated and what’s left is a somewhat adversarial relationship between developers and publishers. And I’m personally determined not to let that happen to the casual games industry if I can help it.

Aside from killer parties, what happens at Casuality conferences?

(laughing) It’s great to hear that word is getting out about the parties! It’s an indication that we’re succeeding in our effort to build a vibrant industry network within the Casual Games Association.

I look at it this way: One of the reasons we like to encourage such social events at our conferences is that it helps people make connections-and “connections” is really what Casuality is all about everyone learning from each other. So you’ll have casual game developers, publishers, and distributors teaming up to tackle the issues and challenges which lie ahead for the industry. We’re trying to bring together everyone in the industry in order to make the industry better.

Do you ever plan to invite game players to these events?

Absolutely. We think having players at the conference can really energize the creative atmosphere we’re trying to engender. I can even envision a day in which we sponsor panel discussions or focus groups that can provide our members with supplemental qualitative insight into their customer base. It all depends upon how interested the membership is in making something like that happen. But I feel pretty strongly that we’ll be a better organization if we can facilitate interaction between those who are working and those who are playing in the casual games space.

What kind of a crowd are you expecting at Casuality in Seattle?

I may be biased, but it’s going to be an awesome conference, with over 100 speakers and 25 sponsor companies. We already have registered over 700 attendees to Casuality in Seattle-and the number is growing every day. We’re expecting everyone who is anyone in the casual games space: developers, publishers, distributors, tool providers-even people from other associations who have heard the buzz and want to see what everyone is talking about.

We’ll have participants coming from all around the world, including lots of people from Asia and Europe. It is fun when someone from Eastern Europe registers because of visa rules- I get to write all of them personalized letters of invitation.

All of this is very exciting for me of course, because our growth has been tremendous. At our last conference-six months ago in Amsterdam-we had 409 in attendance. We’ll have twice that number in Seattle, including lots of people who have attended in the past. Any time you can get someone to take the time to come back a second or third or fourth time, it’s a pretty good indication that you’re doing something right.

You are one of the few women I know of who works in casual games development. What needs to happen for more women to get involved in creating casual games? Does it even matter?

When you consider the cross-demographic appeal of casual games, I think it’s inevitable that we’ll see more and more women in this space. And that can only be a good thing. For the most part, core games are made for men by men, and I don’t expect that to change any time soon. But we have an opportunity in the casual games space to extend the reach of both the profession and the diversion because we make games that everyone plays.

Here’s how I think it will play out: Many of the guys I know grew up playing games and that’s what led them to a career in game development. I suspect that many of tomorrow’s casual game developers are playing our games right now-and a fair percentage of those are young girls.

Furthermore, if you’re a casual game developer or publisher, you should be very interested in a woman’s perspective because so many of your users are women. So although the Labor Board might not like it, I’m guessing that a qualified woman seeking a job in our industry has a significant competitive advantage-because she has the ability to truly understand the target demographic. Jack Welch frequently talks about creating a workforce that mirrors your target demographic-and who are we to think we know better than Jack Welch?

Suppose we fast-forward five years from now to the year 2011. What types of casual games and offerings will I be playing?

It may sound a little simplistic, but I don’t think you will see a radical difference between the kinds of games that are popular today and the kinds that will be popular in 2011. It’s the nature of our business. By definition, a casual game is quick to learn and easy to play, and that means adhering to certain conventions related to game mechanics, user interface, scoring, and repeatability. Tetris was built over 20 years ago and it remains one of the most popular games today. Likewise, there are a multitude of ancient games we still enjoy today: Hearts, Spades, Mahjong, Go, Checkers, Chess, Dominos. And it won’t surprise me to see people still enjoying those games in 2011.

Even so, there are some changes that I think we can reasonably expect. As I said, I expect to see more and more women making significant contributions in the years ahead, and I don’t know that we can reasonably calculate how they might make their presence felt. I would also guess that on the fringes of the casual games space we’ll see some blurring of the distinction between core games and casual games. I imagine that there are core game developers already trying to figure out how to infiltrate our space in order to extend the reach of their properties. And I’m sure that some of them will be successful. I don’t think you’re going to see a lot of housewives dropping Word Jong to play Halo, however.

On the other hand, I believe that as we flourish, more hardcore gamers are going to become avid casual gamers as well. I don’t think our games will replace the kinds of thrills that hard core gamers are looking for, but casual games were never intended to. Ours is a different kind of entertainment, complementary to-not competitive to-the hardcore gaming experience.

The biggest change I anticipate is on the distribution end of things. Many portals are finding great success with a more sophisticated advertising supported model of game-play-it’s much like TV. At the same time, paying for what you play is also resonating with consumers. Meanwhile, the success of casual games on mobile devices is also shifting the economics of our industry while introducing our titles to a whole new group of players. I can’t begin to guess what other new delivery systems may be out there, but I think it doesn’t take too much imagination to guess that the “60-minute demo, $20 purchase” model will no longer be the norm five years from now. If nothing else, the 1% to 2% purchase rate that we’re getting today demands that we find a better way.

And of course, “finding a better way” is the whole purpose of the Casual Games Association. You know how it goes: If you’re not working on it today, your vision of the future doesn’t much matter.