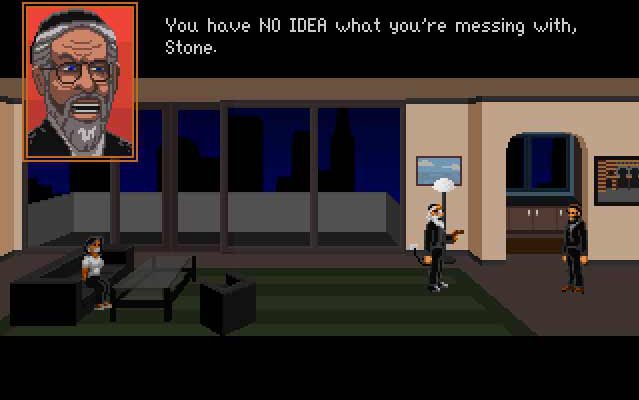 Dave Gilbert wasn’t intending to make games for casual audiences when he created The Shivah, The Blackwell Legacy and Blackwell Unbound in the style of the classic adventure games of the late 80s, but as it turns out, casual gamers love their point-and-click adventures too. Gilbert recently spoke to Gamezebo about the renaissance of adventure games, his early days as an indie developer, and his recent deal with PlayFirst.

I have to ask about the art style. Was it because you had no money…?

Yeah pretty much. It’s funny because people are trying to find some intellectual, artistic meaning behind the pixelated art style, when the reality of it is I just didn’t have the money for anything bigger. High-res graphics take a long time to make and are therefore more expensive, while I could get a really good artist to make good low-res graphics reasonably cheaply, so I went with that.

Simply because, when I started making games, I wanted to make a living doing it. It wasn’t a hobby, I didn’t want to just take a few years on the side and make a game – I wanted to make games to live on, so I needed to get them out reasonably quickly and the only way I could do that was to get them out faster. I had to get the art done faster, so low-res was the way to go. It kind of tied into that nostalgic appeal, but ironically enough, people are thinking that it was a choice I made when it really wasn’t. I worked with micro-budgets, like a few thousand dollars.

What about The Shivah?

The Shivah cost me nothing. I paid a guy a royalty from whatever sales I made. Originally, I didn’t intend to sell it. It was free, and not many people know this. I did it for a monthly adventure contest, and I just kind of made it. I was not doing much, I was in between jobs, I had money saved up from a teaching gig in Korea, and my apartment was being rented out, I was staying with my parents and I didn’t want to be sitting at home all day without a job, so I took my laptop to a coffee shop and made The Shivah for this contest, and won the contest, and I’m like, “Wow, I love doing this. I want to try to sell a game,” and I came up with Blackwell. 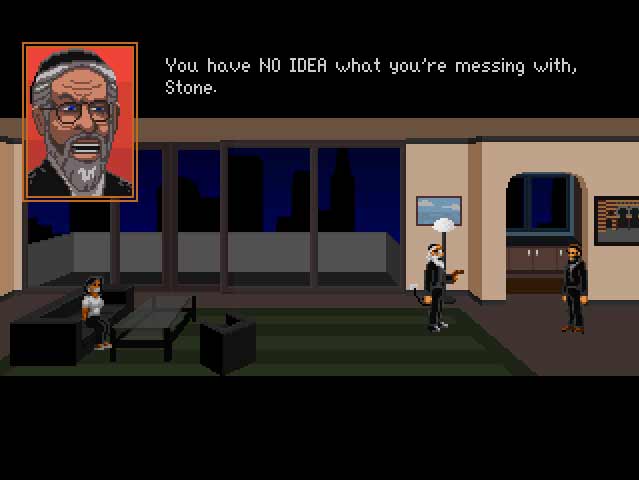 Most of the people I hired were freelancers, and they came from the freeware world, so I don’t know how I did it… I know that there have been a lot of freeware adventure game people who were all going to work on commission and royalties. And they were making these huge, epic games that would take years to make, and they were huge, and none of them ever got made.

And I thought, well of course the team isn’t going to be that motivated to work when the game is going to take three years to make and they’re not getting paid. But let’s say the game’s cycle is three or four months, they’ll be seeing their royalty check that much sooner, so I pushed to keep the development time short, that way the freelancers were more willing to work for royalties because the game would be done that much sooner.

And by that point I kind of had a reputation in the freeware world of getting stuff done, so they trusted me more than they would other people. Although the animator, I paid him more upfront. I sort of pay people upfront now, when I have the money to do so.

The Blackwell games have been released on a number of casual game portals. What made you decide to approach them?

Really it was Amanda Fitch from Aveyond, she recommended that I do that; she said that’s how she really got her name out there. I said, “They’re not going to be interested in my stuff,” and I didn’t really know anything about the casual portal world, and she actually hooked me up with a woman from Big Fish Games and I met her here at GDC [the Game Developer’s Conference] last year, and I met [PlayFirst] at GDC next year, and suddenly all these casual portals are saying “Yes, we’ll totally take your games!” And I thought, “Ok, maybe there’s something there.” 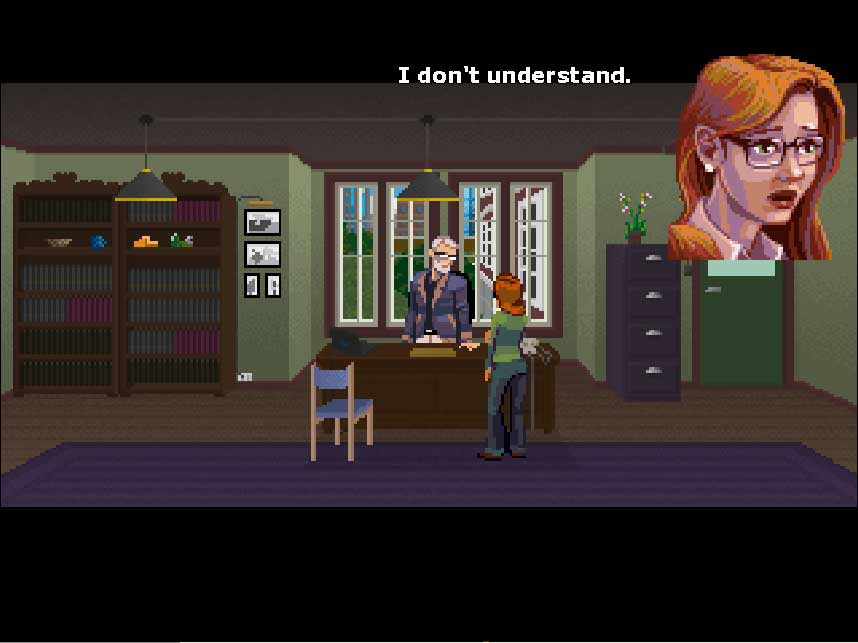 The Blackwell Legacy introduced Rosangela and her spirit guide Joey

Since you come from an adventure game background, what are your thoughts about the casual game world?

I didn’t intend for Blackwell or Shivah to be for the casual audience when I started making them, so the fact that it’s got a casual following I think is kind of cool. It’s been like entering a whole new world really. Based on my experience within the freeware and adventure game scenes, you deal with hardcore gamers and old-school adventure gamers who are mostly males, or teenagers just starting to get into it.

When I released a second game on the casual game portals and I started looking at all the sales statistics, I found that not only did people buy the first game but they came back to buy the second game. The statistics and demographics fit the casual market in terms of 30+ women, usually the mid-west or in family situation and things like that.

Do you identify yourself as a casual gamer now?

It’s hard to say. I’m making games for the adventure game audience, but I’m making them more accessible to the casual gamers. With The Blackwell Legacy, I did not make it accessible at all, I think, because when I first gave it to some portals, they couldn’t even play it. They didn’t understand how to play it. Just various adventure game mechanics that someone like me takes for granted having played adventure games for 20 years – things like using inventory items on objects, talking to characters, like back in the Monkey Island days, the casual gamers couldn’t figure out. So I kind of slapped on a tutorial, and it still wasn’t completely accessible to the casual game audience.

What does the term casual game mean to you?

It’s hard to say. It’s really blurred now, isn’t it? The textbook definition is something you can play casually, but the casual gamers I’ve met are anything but casual. I think the trend that seems to be going towards point-and-click adventure games as the next logical step, because you had the hidden object games are very much point-and-click – you find something, you click on it – and the better-received ones are the ones that have strong story attached to it, like Dream Chronicles, and it seems like an adventure game, which is a point-and-click game that is strongly story-based with puzzles. 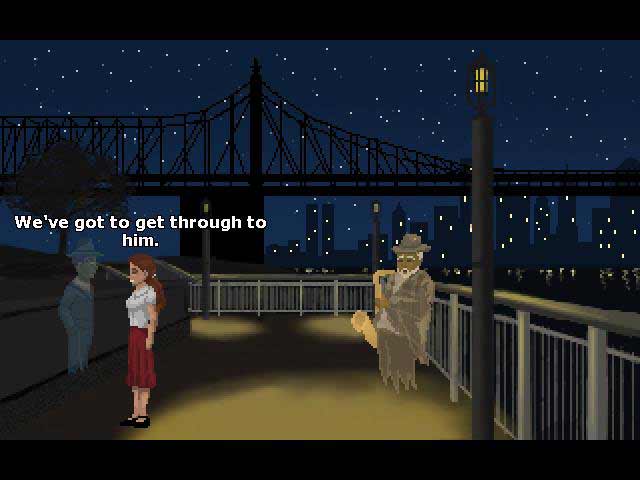 A prequel to Legacy, Blackwell Unbound followed the story of Rosangela’s aunt Lauren.

It’s kind of neat that we’re hearing from these casual portals that these games have never been tried before; all these games that have existed since the 80s. It’s nice to be kind of the front-runner of the resurgence. People say “adventure games are dead, they’re not coming back.” I think the casual game space is where they’re coming back. And we’re seeing it now with Sam and Max – that has a big casual following. We’ve seen it with Blackwell, we’ve seen with Ghost in the Sheet and the Nancy Drew games.

Tell us about the new game and the partnership with PlayFirst

When I was first approached by PlayFirst, I admit that at first I didn’t take it seriously because they said ‘”We want you to write a game for us,” and I looked at their catalogue and thought “I can’t write games like this!” But [PlayFirst Creative Director] Kenny Dinkin assured me that “No, we want an adventure game; a real adventure game like the ones you make,” and I said “Oh, great! Fantastic!”

So really the format is not going to be changed in any way from what I normally do, except that it’ll actually have the budget, and it’ll be full length compared to what I normally do. Blackwell‘s gameplay is about 3 or 4 hours, but this will be significantly longer.

Also there are resources and support in general, like the PR and sales stuff, which is always something I had to do on my own and it always took time from development. When I released Blackwell Legacy I found that there was so much work involved with the whole sales and marketing support aspect of it that I didn’t have much time to work on the second game and it took me that much longer to get it done. It was always “Ok, do I do biz-dev stuff or do I make the game,” and it was always a difficult decision that I had to make. Now, all I have to concentrate on is making games.

What other games are you playing these days?

Not many. I just played Portal. I finally got a computer that can play it. First-person shooters make me sick, which is why I like adventure games.

Really, two years ago I never envisioned anything like this happening. It’s kind of surreal and scary but ultimately extraordinarily cool, and the fact that all these people believe in what I do, it’s very gratifying.

Just In – Curse of the Pharoah: The Quest for Nefertiti

How Gamenauts found the right spot for Cate West