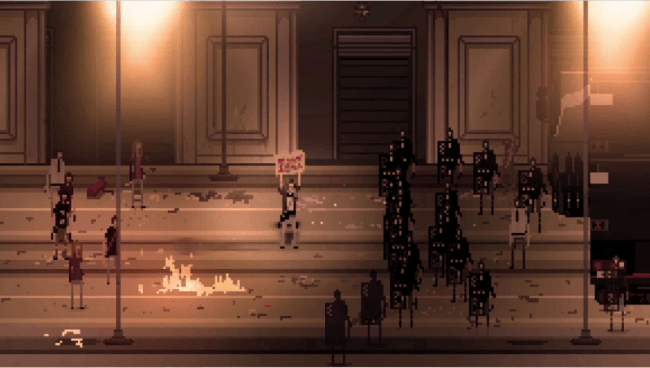 Despite how much progress the human race has made in recent years, there’s no denying the fact that political strife and unrest still exists in all parts of the world today. And there is so much more behind these violent economic riots than what we see on TV or read about on the Internet. Well now we have an ambitious riot simulator game to shed some light on those unspoken questions, like “What is it that triggers such a strife?” and “What does a cop feel during the conflict?”

To fully tell the stories of everyone involved in these encounters, RIOT will let you play on both sides of the struggle: the outraged community, and the stalwart law enforcement in scenarios where there’s really no “victory” or “defeat.” RIOT is the brainchild of Leonard Menchiari, a former editor and cinematographer at Valve, and has a planned released for iOS, Android, PC, Mac, and OUYA platforms. This game is almost sure to turn some heads, and Menchiari is already preparing for a possible App Store rejection based on the game’s controversial content.

RIOT’s 8-bit visuals call to mind such indie gems as Superbrothers: Sword & Sworcery EP, with that unique blend of realism and pixelated art. In the debut gameplay trailer, we see wild citizens wielding rainbow flags in fortitude, shoving their feet through storefront windows, and standing on top of burning cars to make their voices heard. We see a line of stoic policemen slowly advancing on them with riot shields raised. While exact details about the gameplay still remain scarce, it looks as if you’ll have to manage and manipulate your respective crowds of rioters or policemen using simple commands.

In an interview with IndieGames, Menchiari revealed that the game will bypass any issues of ethnicity serving as fuel behind these real-world riots: “Let’s say that ethnicity makes every human disconnected, while this game is not about that. The more I dig in detail the more I’m starting to believe that there is a deep connection between all of us. I am not willing to tell the players what that connection is, that would be impossible. I’m just pushing them to try to see it for themselves in the game and in the real world.” In the same interview, Menchiari also revealed that the media will have an indirect role in RIOT, and mostly influence what happens after each battle.

But that’s not even what I found to be the most interesting thing about this Indiegogo campaign. In addition to covering the costs of development and testing, the fan funding raised for RIOT will “enable the developers to travel, document and experience live riots going on in Italy, Greece, Egypt, and possibly many other places around the world.” Now that’s some serious dedication!

RIOT has already reached its initial goal of $15,000, but there’s still 16 days left in the Indiegogo campaign if you want to donate and get in on some of the cool rewards being offered, like access to the game’s early private beta, or a personalized 8-bit character to stand in the center of the scene. On which side of the fold will you choose to stand?