Home / News / Indie Game: The Movie is essential viewing for anyone who has ever loved video games

Indie Game: The Movie is essential viewing for anyone who has ever loved video games 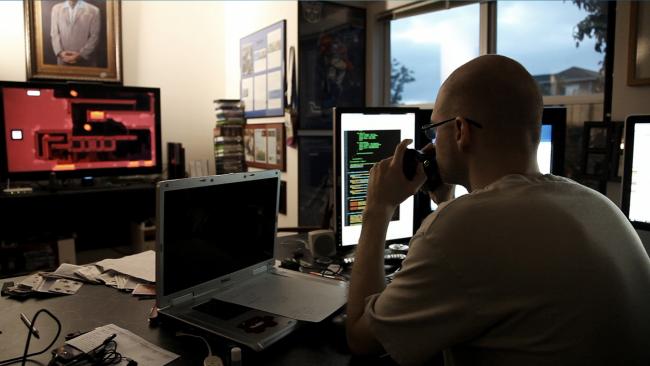 While they might be made by little teams, indie games have proven to be big business over the last few years. Shirking the traditional publisher/developer relationship, where games are made in 1000 person teams, indie developers are small groups of people (or in some cases, just one person) making games because it’s what they love to do – and Indie Game: The Movie is a celebration of that.

A few members of the Gamezebo team were lucky enough to attend a screening of the film last night in Canada, and each of us walked away genuinely moved by the experience. Some of us felt like it was a validation of the careers we’ve chosen in games journalism. Others quietly envied the developers, wishing for the first time that they were on the other side of the fence. But there was one universal opinion we all shared: Indie Game: The Movie was an exceptional film that shouldn’t be missed by anyone.

Before we get into the film itself, I’d just like to give a quick nod to the folks at HotDocs for arranging a screening that – let’s face it – ended up making us feel like we lived next door to the Jetsons. You may have noticed that I said the film was screened “in Canada.” That’s a pretty broad assessment, and yet that’s exactly what happened. The film debuted simultaneously across more than 40 screens courtesy of a satellite feed simulcast, which was then followed by a live Q&A based out of The Bloor HotDocs Cinema in Toronto – and those of us in satellite cities could ask question live via Twitter.

Seriously. We live in the future.

Indie Game: The Movie follows three developers at various stages of release; Jonathan Blow, Team Meat, and Phil Fish of Polytron. Blow, whose game Braid is credited with blowing the lid off of independent games and elevating them to mainstream marketability, examines the experiences of his game in a retrospective manner. Team Meat, aka Edmund McMillen and Tommy Refenes, are in a mad rush to put the finishing touches on their (then) upcoming Super Meat Boy to make it into Xbox Live Arcade’s fall showcase. And Phil Fish, creator of Fez, deals with the mounting expectation for a game whose development cycle has taken much longer than his audience seems to be willing to accept.

Individually, any one of these would have made a fascinating subject for a documentary, but by weaving them together, the filmmakers manage to tell the larger story of independent game development as a whole. As we watch, we feel the passion of the developers to make a game that’s a personal experience – an extension of their psyche that they’ve poured every last piece of themselves in. We feel the exhilaration and excitement they feel whenever they get positive feedback from the internet. We feel the crushing pain and frustration they feel whenever they get the opposite. And by telling the story from three perspectives, we really get a complete picture: the early, lengthy stages of development (Fez), the crunch time when a great opportunity arises (Super Meat Boy), and the impact the experience has had once a game’s development and release cycle has come to an end (Braid).

The directors also managed to pick three unique sets of personalities for the film as well (four if you break Team Meat up into its two members, and five if you include “the internet.”) In fact, the internet may have been one of the most quintessential characters of all. For good or for bad, public opinion and press relationships from the web were depicted as a significant driving force behind success and failure.

Indie Game: The Movie isn’t just a great documentary, though – it’s also an early Kickstarter success from 2010. In case you haven’t gathered from our Kickstarter Picks series, we’re big fans of the crowd-funding model – so seeing something that started as a lowly $15,000 request on Kickstarter make it to the big screen is pretty neat. And it doesn’t look like it’s stopping there. HBO has recently optioned the rights to spin it off into a series.

The only thing that disappointed me about Indie Game: The Movie was how few people came out to see it. As a one night only event, I thought there’d be a sizable turnout. Certainly not a sellout – I’m a reasonable person here – but maybe a half packed theater. Instead, I was one of about eight people in attendance at the Niagara Falls screening. Mind you, Gamezebo’s own Eli Cymet was watching the same simulcast from Ottawa, and he figures there were around 300 people – so your mileage may vary.

Regardless of the numbers, there’s one thing I’m sure everyone can agree on – more people need to see this movie. There are additional screenings coming up, and a limited release is scheduled for select cities later this month. Be sure to check out indiegamethemovie.com to find out when and where you can see this one on the big screen for yourself.