There are a lot of perks that come with being an independent game developer. First and foremost, you don’t have a publisher trying to tinker with your creations. That very prospect is what has inspired so many people to go solo or develop for the smartphone and browser platforms in the first place. Awesome though it is, it leaves many of them without any sort of business backbone or financial leverage to promote their games. This is where Selfpubd comes in.

Selfpubd was founded by Andy Rosic, a developer who grew tired of the limited promotional and publishing resources at his disposal.

“Selfpubd is a collaborative publishing movement for game and app developers who are making games and apps for mobile, social or online. I started the company out of frustration of being a game developer, an indie developer who was on the same rollercoaster ride that most developers find themselves on, because the App marketplace — especially mobile — and in social too, is such a wide-open arena,” he told me over the phone. It’s an issue nearly every developer faces at one point or another, and it results in a lot of great games going unnoticed.

“I call it collaborative, but it’s sort of co-op style where indie developers join, become members, and as a group we become more powerful than each individual because we’re now all focused together on promoting ourselves through Selfpubd and keeping our name, keeping that branding, and acknowledging what company has built what game – unlike with many publishers where they take 70% of your net revenue and they bury your name. No one knows you made the game,” Rosic told me. Indeed, for years developers have lamented the heavy-handed role publishers take in the direction of their games, looking to bake in elements that align with what’s currently big in gaming. The recent announcement of Dead Space 3 being more action-oriented is a fine example, but the list is just about endless.

That isn’t to say all publishers are bad, of course. But there are plenty of creators out there who’ve been forced to stick with them and see their work head in a direction they aren’t happy with. Kickstarter has provided one alternative, and so has the burst in browser and smartphone gaming. But that very burst creates problems all its own: It’s a lot of content for users to sift through, and no platform has really stepped up in a way that enables them to better discover the games they may like. Selfpubd’s brand of cooperative promotion could fix that problem for a lot of developers.

“There are a lot of great apps waiting to be found, and people are really happy once they do. We just have to connect the dots,” said Rosic. The primary method in which Selfpubd will aid developers is a soon-to-launch site called Thumb Arcade. I asked Rosic to tell me all about it.

“Thumb Arcade becomes this quiet place amongst all the noise. Everybody is in one spot, it’s really got an amazing design to it,” he informed me, “It’s going to create a place of discovery, and a place for the actual indie developers to push their goods.” When Rosic says “push their goods,” he really means it: Thumb Arcade’s content will be generated by Selfpubd members.

And just how many members are there, anyway?

“Initially when I put the idea of Selfpubd out there, I created a launch page and emailed maybe half a dozen developer friends,” he said, “And then a couple of weeks later there were almost 350 email registrations, saying “we want in.”” Developers everywhere are seeking some sort of assistance in getting their games known, so it’s easy to see what the appeal is for them. With Thumb Arcade, they’re provided a chance to promote their game outside of the typical – and not always effective – channels of advertising. 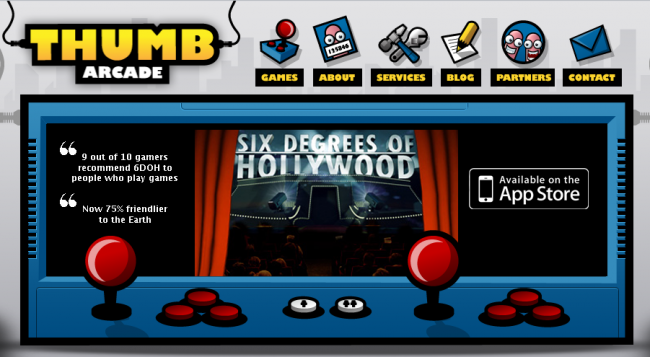 The passion in Rosic’s voice about the project was easy to detect, so I couldn’t help but throw a bold question his way: Could he ever see a model like this overtaking publishers in the mobile/social/browser arenas of games?

“I don’t think that publishers will go away. I think they’re going to have to change how they do business,” said Rosic. By offering developers with alternate forms of publishing and promoting, the potential is there for Selfpubd to play a role in this change. Regardless, Rosic is confident the model he’s presenting will be able to coexist with traditional publishing methods.

“I think the concept of this collaboration or co-op idea will begin to take hold,” he told me, “Pretty much everyone can be a developer if they want to, and self-publish, but what you remove is that sort of dedicated marketing effort and wide reach. But those things are easily overcome if you do it right.”

Selfpubd is free to join, but purchasing a membership opens up a wider suite of tools to developers. By using the aptly-titled coupon code “SAVE100”, $100 will be taken off the fees. The offer is gone at the end of this month, so make sure you get on it if you’re thinking of joining.

If Selfpubd takes off — and Rosic is very confident it will — it could mark a profound change in thinking for developers everywhere. Rather than view other content creators as opponents of sorts, they can be viewed as supporters and collaborators. Which is not to say there’s some sort of heated rivalry that exists between all developers out there. There’s a degree of camaraderie that’s noticeable at every gaming convention or gathering. But it’s rare to see a platform that encourages them to work together in a way that benefits the group at large. Because of this — and because I’ll take all the help I can get in tracking down awesome games — I’m looking forward to seeing how well Selfpubd performs.

Replay Wednesdays: Gnome Town, Nightmares from the Deep, and more!