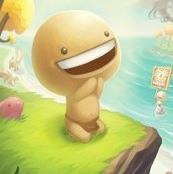 Idle Games recently made some waves at the TechCrunch Disrupt conference in San Francisco, when co-founder Jeffrey Hyman compared Zynga to a black and white television. During a lengthy interview with Gamezebo, Hyman expanded further on the developer’s focus on quality, which includes both match-making and synchronous gameplay features, to create what Hyman believes is “the first truly social game that’s going to be on Facebook.”

Idle Worship is a god game in which players compete with one another for the devotion of little followers called mudlings. During our interview, Hyman described a gameplay scenario in which one player could flick another’s mudling off of their island. The mudling would then land on an island elsewhere in the game, providing a way for strangers to meet each other through the game.

“I think that the unrealized promise of social gaming is to create connections,” Hyman told Gamezebo. “And I always thought that social gaming should provide the opportunity to create connections. But at the same time, human nature is such that people aren’t going to take the time to meet new friends because, first of all, people are inherently shy and it’s awkward to go up to someone and say ‘Hey, will you be my friend?’ The game needs to be your wingman. It needs to be your buddy. It needs to be able to introduce you to new guys and girls that the algorithm think you’re going to get along with.

“So, in a way, we’re much more akin to a Match.com or eHarmony, where we’re looking at all of the users that come in from Facebook, we’re analyzing through the recommendation engine what your personality profile is like based on the information that you’ve provided Facebook. After that we identify you into one of these types of archetypes, and we know by training the algorithm what archetypes play well together. And then as you continually play the game more and more we continuously add to your dossier about how you play, and then we can continuously refine the people that we’re introducing you to. And actually refine the world that you see.”

Hyman also went into detail about Idle Games’ focus on quality — Idle Worship has been in development for close to two years — explaining that the studio hopes to one day “be the Pixar of casual games.”

You can sign-up for the Idle Worship closed beta here.

Are you better than Gamezebo at Kard Combat? Prove it and win a signed poster!