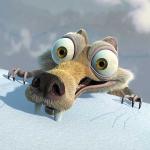 Fox and Gameloft are announcing that Ice Age Village will be coming to mobile platforms (likely iOS and Android) later this spring. What exactly does this mean for Ice Age fans?

Well, the name of the game clearly indicates it could be some sort of social game wherein you build an icy town and characters from the film franchise can live and work there, much like the Springfield you create in The Simpsons: Tapped Out. This is all just speculation, however.

According to Gameloft, the gameplay will involve Sid, Manny and Diego from the films, and you’ll be able to complete quests and play mini-games with Scrat.

“As one of the most popular and beloved animated film franchises, we know that the fourth Ice Age film comes with great anticipation,”said Gonzague de Vallois, Senior Vice President of Publishing at Gameloft.”As such, we’re absolutely thrilled to offer the official Ice Age game on smartphones and tablets.We have invested tremendously in this title and it is definitely one of our most important launches this year.”

While details are scarce on Ice Age Village for now (besides its spring release date), you can go ahead and follow the game here on Gamezebo to get all the latest updates as they come in.