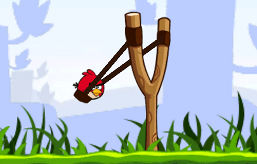 Virtual d-pads, analog sticks and buttons suck on mobile devices.  That may sound like a harsh statement, but I think you’d have a pretty hard time finding anyone who’d disagree.  And heck – this is the second time this week I’ve had to say it.  As it turns out, I’m not the only one.

Rovio’s Matt Wilson took a shot at them during his presentation at Casual Connect Kiev this morning, saying “if you have a virtual joystick game, you’re doomed from day one”.  By pure coincidence, a presentation from ReignGames founder Matthew Mayer took place later in the day that explored this idea, acknowledging that their own Crush the Castle clone failed in the same timeframe that Angry Birds succeeded – largely due to poor choices in control.

ReignGames had released Crash the Crib, a game with similar play to Angry Birds (which too was inspired by Crush the Castle) in 2009 – but while the Birds soared, the Crib crashed.  The problem?  The gameplay didn’t touch on what Mayer calls the “key factors for control in touch.” In his opinion, every touch game should adhere to the following principles;

The first step in best use, says Mayer, is having the controls be intuitive.  What would a player do naturally if given no instruction?  Fruit Ninja‘s swiping mechanic is a great example of intuitive success.  So is the slingshot in Angry Birds, which Mayer calls “a masterpiece of control design.”

Angry Birds’ slingshot also manages to provide feedback to the user.  Pulling on it reveals audio cues to let you know it’s been pulled, and the visual cues match to show you that you’re actually pulling it.  (after three consecutive examples, I’m starting to see why Mayer called it a masterpiece.)

The final element in great touch design has to do with accuracy – or more importantly, remembering to go easy on it.  Humans are an ingenious bunch, but we’re apt to not tap in the right place or not swipe as quickly as we need to. And touch controls need to be forgiving in response to that.  “We all have smart phones,” says Mayer, “but at heart, we’re still quite dumb cavemen.”

In the end, Mayar’s points can best be summed up with the classic cliché “keep it simple, stupid.”  That said, his own closing comments at Casual Connect Kiev put it a bit more eloquently than my homespun bumper sticker wisdom ever could: “If you start feeling the need to add a tutorial at the beginning of your game to explain the controls, that’s almost certainly a sign that your control scheme has already got too complicated.  A good intuitive control scheme really shouldn’t need a tutorial.”

Don’t try to be a big fish in a big pond: Why developers shouldn’t be targeting the US market (Casual Connect Kiev)