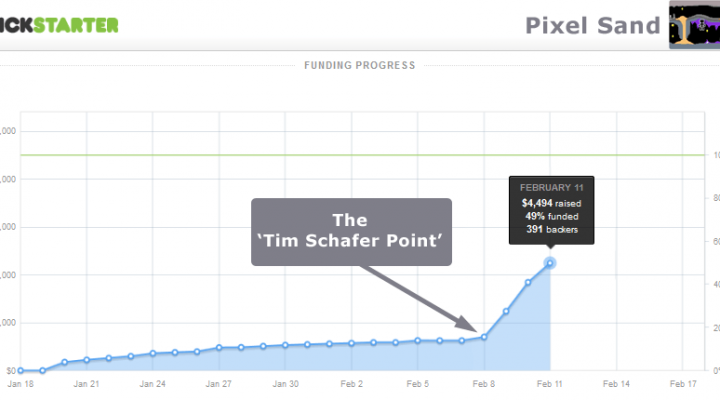 Over the last few years, Kickstarter has proven to be a real boon for the indie games development community. No longer fearing that their projects won’t make back the initial investment, the crowdfunding model has become all but a must for any financially sensible indie developer. So how do you take this business model and make it even more viable? You tie a big project to it that gets everyone talking.

Last week, Tim Schafer (the genius behind everything from Day of the Tentacle to Psychonauts) decided it was time to set up his first Kickstarter project. You see, Tim has a hankering to return to the classic days of point and click adventure gaming. After all, it’s where he got his start. But as it turns out, no publisher worth their weight in salt would pony up the greenbacks needed to get any such project off the ground. So he decided to reach out to the public and ask for $400,000. $300,000 to make the game, and another $100,000 to make a documentary about the whole process. In less than 24 hours, he hit $1 million, and everybody was talking about Tim Schafer and Kickstarter.

But how could his one little project make a difference for the entire indie games industry?

Well for one thing, his untitled “Double Fine Adventure” project has resulted in a fair bit of run-off. It’s something that Trevor Sundberg, the developer of the Kickstarter project Pixel Sand, is referring to as “The Tim Schafer Point.” 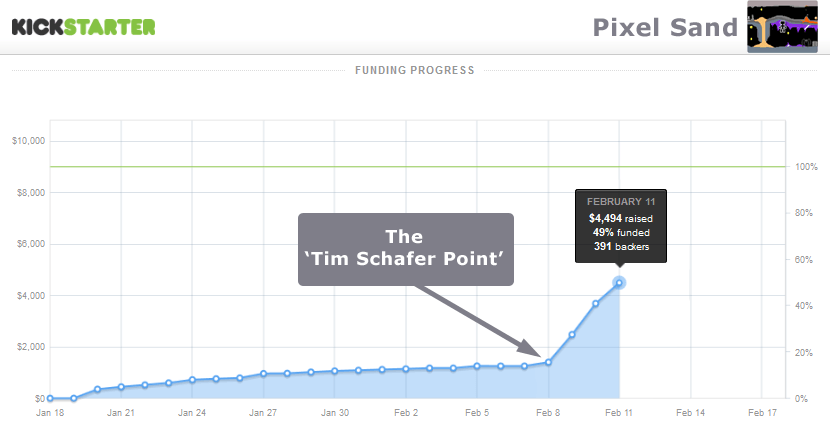 That is, the point in which their project picked up financial steam, which just so happens to correspond with the arrival of the Double Fine Adventure project and it’s thousands of backers.

“I’ve been working on a small game for a while now called Pixel Sand,” Sundberg told the Reddit community. “The project’s been up on Kickstarter for about 22 days without much progress, when all of a sudden THIS happened. A number of people who visited Kickstarter to fund the Double Fine Adventure ended up on my (and several other indie developers) pages.”

And while this evidence is anecdotal, it would be pretty hard to believe that this hasn’t happened for dozens of Kickstarter projects over the last few days. By shining a spotlight on Kickstarter, Tim Schafer has had a direct and positive impact on the projects of other developers, whether he intended to or not.

But that’s only temporary, right? Once “Double Fine Adventure” fades into the annals of time, the Kickstarter community will go back to its usual level of activity, won’t it?

Maybe, but I’d doubt it.

The reasons are twofold. The first and lesser of these reasons is that this surge in new Kickstarter supporters means that some of these new faces will stick around now that they’ve discovered the service. More supporters equals more support for projects, though admittedly, this probably won’t have all that dramatic of an impact in the long wrong. Certainly not as dramatic as reason #2: Tim Schafer just proved that big developers can skip publishers altogether with the help of crowdsourcing.

Let that sink in for a minute. Now let’s say that you’re Warren Spector. Or Denis Dyack. Or Will Wright. You’re mulling over some big ideas in your head, and you think you’ve hit on the next great video game concept. Do you want to bring that to a big publisher who is going to warp, distort, and underfund your project, forcing you to meet an impossible deadline that potentially results in a half-finished game? Or are you going to go directly to the consumer and pre-sell your title, raising every last penny you need to make the game you want to make?

And when that happens, more people will hear about Kickstarter, and the Tim Schafer Point will happen again, with the benefit trickling down to smaller developers working in the indie games space.

In an instant, Tim Schafer has just redefined what it means to be “indie.” And not only is it a blessing for those already in the community as well as those so big that we might not have considered applying such a label before, but it might also be another nail in the coffin for the previously established developer/publisher model that’s been dying a slow death since the advent of the App Store.