Home / News / How a Game About Broccoli and Cheese Soup Turned into Threes!

How a Game About Broccoli and Cheese Soup Turned into Threes! 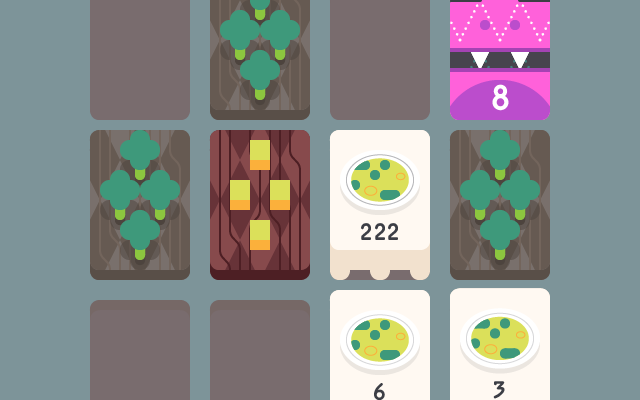 “Less is more.” It’s something we say all the time, but how often do we actually think about what it means?

Greg Wohlwend has considered it more than most people. As an artist on games like Ridiculous Fishing, Hundreds and, more recently, Threes!, it’s his job to make the games you play pleasing to look at. But sometimes the best designs are the simplest, and that’s not just aesthetics.

“At one point we tried broccoli and cheese soup as a theme,” Wohlwend said during our interview. “You had broccoli, then you had cheese and so those are your ones and twos. Then you create soup. And maybe you create more soup. That’s obviously, as I say it, a horrible idea.” 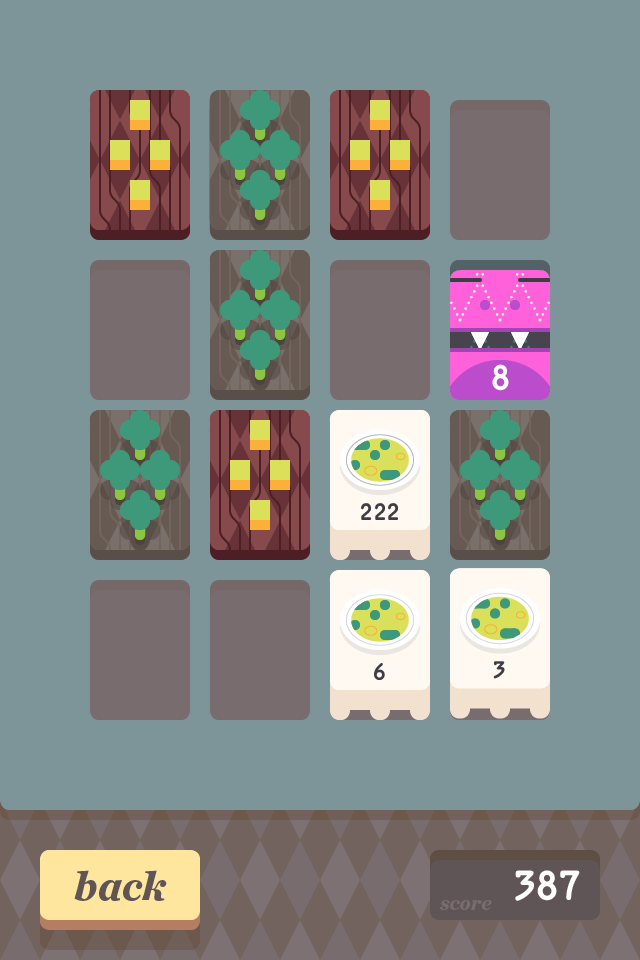 Like previous games Wohlwend has worked on, Threes! is very minimalist. It’s about sliding together numbers to add and multiply one another. On its face, that’s hardly the most exciting subject matter for an artist to tackle. So Greg, along with his co-developer Asher Vollmer, looked for more distinct designs: from broccoli and cheese soup, to military ranks, textile patterns and hydrogen atoms.

Over the game’s year and a half of development, the duo went through something like two dozen themes. None of them worked.

“Asher explains this really well,” Wohlwend continued, “the game always wanted to be simple and tiny.”

And “tiny” is the word he thinks describes it best. While math is tangentially related to both Threes! and his earlier Hundreds, They’re both really about one of the first concepts we develop as infants.

“[The players] see numbers and they think math,” Wohlwend said, “but really Threes is a very spatial game. It’s all about spatial relationships. Hundreds is also a game that’s very much about space as well, but they all just tend to have these number themes.”

And that’s where the eventual design for Threes! originates. In one of the game’s earliest mock-ups, numbers and colors were used as placeholders – something to give the designers an idea of how that spatial awareness played out. Once the cruft was chiseled away, what worked for the developers so early on was what remained, and it’s what players now see when they download the game. 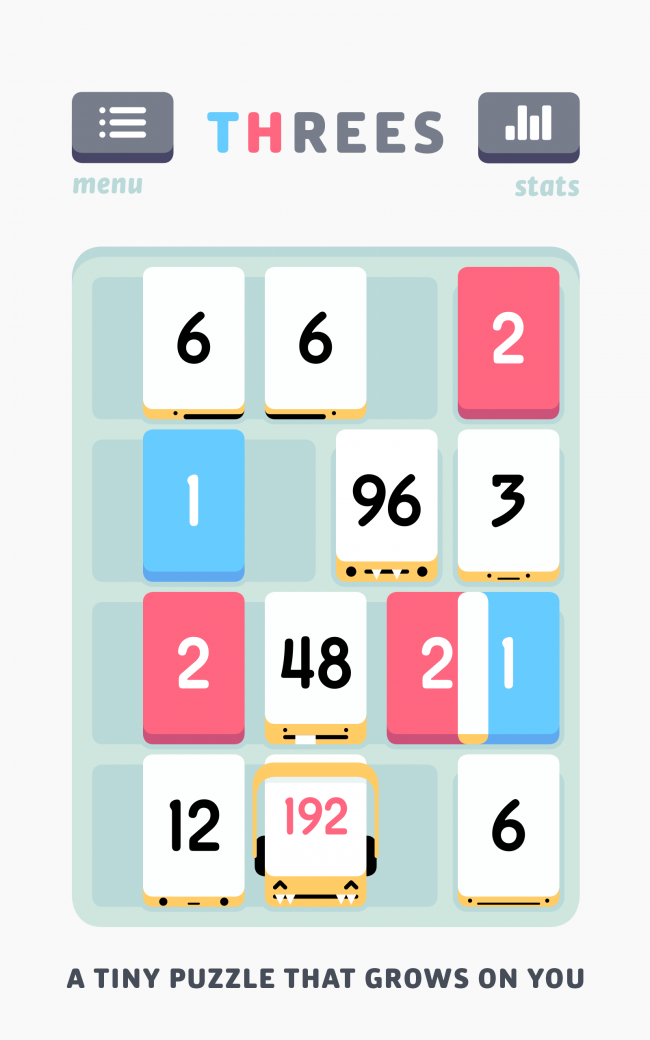 The only remaining hint of the game’s past is in its characters. As players match and grow the game’s numbered tiles, they develop facial features and personalities.

“The characters on the bottom kind of came from an earlier mock-up,” Greg explained. “Like, we were playing with just full face kind of cards. So there wasn’t any numbers or anything like that. There was just faces. And they would get more complex and bigger and have more eyes and look scarier and grow wings and stuff like that.”

It almost seems like the artist’s own, hidden joke. The game that became simpler throughout development actually begins to look more complex as you play it.

Whether he makes light of it now or not, the time spent in development was difficult.

“That process was tough and frustrating and sometimes hard to see if it was worth it or not,” the artist explained.

His trepidation came from experience. While the games he’s worked on lately have been understandably successful, there were some rough patches.

Gasketball was released as a free download in 2012 with a single in-app purchase to unlock the rest of the game. It was downloaded about 200,000 by the middle of August that year. Despite that, Wohlwend and Michael Boxleiter, his partner on that project, were left temporarily homeless.

In previous interviews, the two have explained how they lived on friends’ couches, using what money they had left from their previous collaboration.

Gasketball had a number of issues. Chief among them might have been that it was free-to-play.

“The free stuff is best left to the people that have behavioral psychologists and economists and stuff like that on their staff,” Wohlwend explained. He went on to say that if you look at the top-grossing games on iOS “it’s all in-app purchases and really popular Flappy Bird clones.” 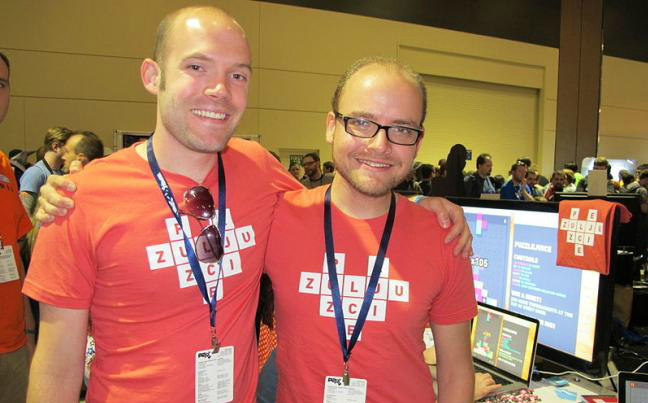 He’s not completely down on the model, however.

“Bring on the free ad stuff over the IAP,” he said.

Gasketball, the supposed dark spot in his career, has turned around with roughly 900,000 downloads since release. By adding an ad-based model to the free-to-play version, the game with the tragic origin has actually become successful. And I hardly have to mention the success of the aforementioned Flappy Bird, which uses the ad model exclusively.

But Hundreds, Ridiculous Fishing and Threes!, they all have one thing in common; they’re “premium” games working on the novel idea of charging money for a set product. Like Wohlwend’s art, they chip away at the unnecessary ideas that have cropped up over time and find the simplest solution.

“It’s huge – it’s a huge audience,” he elaborated. “If ten percent of the people that are fed up with free [in-app purchase] games buy premium, ‘expensive’ two dollar games, and if they buy those up, that’s probably enough. If you’re an indie shop… for two, four people? That’s probably enough.”

Today, Threes! made its way to Android devices. That should expand Vollmer and Wohlwend’s audience significantly while remembering what makes Threes! work. It’s appealing to a wider audience by making it available to them, not by changing its essence.

“Less is more,” even when it doesn’t start out that way.