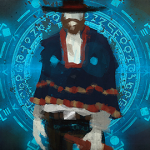 High Moon is an upcoming turn-based dueling game from QuantumCohort. The game combines science fiction elements into an American Old West setting and has players dueling one another using various magic spells.

High Moon has been in development since late last summer. Having originally been planned as a minimalist game using a text interface, QuantumCohort evolved the game to become much more aesthetically pleasing. Inspired by Sword & Sworcery, QuantumCohort emulated the game’s visual style, when renovating High Moon’s artistic direction.

Once High Moon’s graphics were set, the game continued to naturally evolve from there.

“You don’t always know where you’re going as an artist, but there are those beautiful moments when you arrive and it was totally worth the pain and frustration,” QuantumCohort explains on IndieDB. “The core of the game has never changed, and was actually developed years ago, but how that core gameplay is experienced has evolved into a much stronger creature.”

QuantumCohort has plans for a Kickstarter campaign for High Moon in the near future.