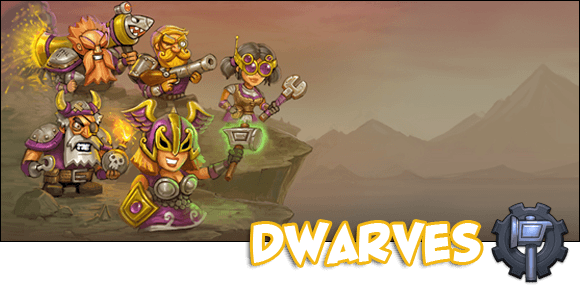 Robot Enertainment’s Hero Academy has taken off since it launched back in December. Gamers have clearly love playing as both the heroic Council forces and the sinister Dark Elves, but starting next week, the developer has revealed a big new addition: a brand new playable faction.

Robot Entertainment has revealed that, come next week, Dwarves will become the third playable team in Hero Academy. This group seems to fall under the “neutral” alignment, as opposed to the other factions who are firmly much more thoroughly embedded in the “good” and “evil” camps. According to Robot Entertainment: “Dwarves are extremely crafty and gain improved bonuses from the playfield’s premium squares. They are masters of area attacks.”

The dwarves will have five different units. Paladins are fighters, who can heal and revive allies. Gunners, meanwhile, are shooters can do a lot of damage both close up and from far away. Grenadiers lob Molotov cocktails, but they have weak melee attacks. Engineers can build shields for either a single ally or crystal and receive higher bonuses from premium squares. Finally, the Dwarves super unit comes in the form of the Annihilator, who deals heavy damage and weakens physical defenses when he scores a direct hit.

The Dwarven faction will also provide players with a brand new (and free!) playing field, featuring a different premium square/crystal layout with a lot of industrial accents. Get ready to download Hero Academy’s latest team when it becomes available in-app on February 22nd.

iCade 8-Bitty to bring NES-style controls to your smartphone