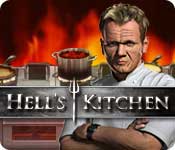 If you’ve already played Hell’s Kitchen you might have noticed that it features a strangely well-behaved Gordon Ramsay, whose mild insults don’t come close to matching the vulgarity-filled rants that he unleashes on the hapless contestants of his television show. However, for a limited time you can download an uncensored version of the game, which is being offered exclusively by Ludia (the game’s developer) and will be available only until the finale of the Hell’s Kitchen television show in July.

Click here to download Hell’s Kitchen uncensored (make sure you click the UNCENSORED! box). It goes without saying that this version contains language that is unsuitable for all audience and might offend some players.