Home / News / Hector: Badge of Carnage may get animated feature

Hector: Badge of Carnage may get animated feature 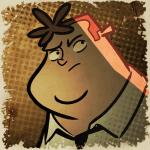 Detective Inspector Hector might be a raunchy British grump, but that doesn’t mean he hasn’t been great fun to play with. Now it looks as though the star of the point and click adventure series Hector: Badge of Carnage might be expanding past his gaming roots and starring in an animated feature.

In a recent interview with PocketGamer.biz, Straandlooper’s Richard Morss spoke candidly on what’s next for Hector and crew;

“If the three Hector games prove successful, we also hope to produce more Hector stuff, not least a digital feature as a companion piece to the games. This has a script and a production structure (sort of) in place and now only requires the balm of money to enable it to happen.”

When you look at the history of Straandlooper, it kind of makes sense that they’d want to produce an animated piece. The studio formed in 2008 to develop original IP’s for digital animation. In fact, their Small Tragedies animated shorts have been sold to Russian TV. Animation, it would seem, is in their blood.

Still, making a digital feature out of Hector is going to require a bit of funding that, judging by Morss’ comments, they don’t have yet. Maybe they should try KickStarter? There are certainly worse places to raise a few bucks.