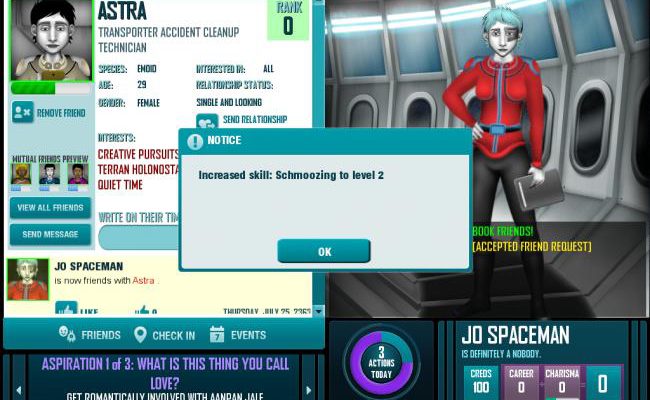 Redshirts: the most disposable resource in space.  The red badge of insignificance has been signing the death certificates of lowly ensigns since Star Trek: The Original Series, making it easy to spot who will get the axe each week—or, at least, unsurprising when someone does.  Redshirt, the game, brings the ridiculous stigmas of the red-shirted minor character into the social media age, where being publically unfriended is equivalent to stepping on a live space mine.

You begin Redshirt by creating your character’s Spacebook profile, which defines their race, gender, appearance, and relationship status.  The available races range from standard human to the tentacled “Xx’th’xx,” and your shirt color is—surprisingly—not confined to shades of red.  As one of 2,000 new recruits aboard the aging space station Megalodon-9, Spacebook will be your primary way of meeting people, building relationships, attending events, applying for jobs, curbing hunger, buying gadgets, and basically anything related to being a living, breathing person or tentacle-creature. 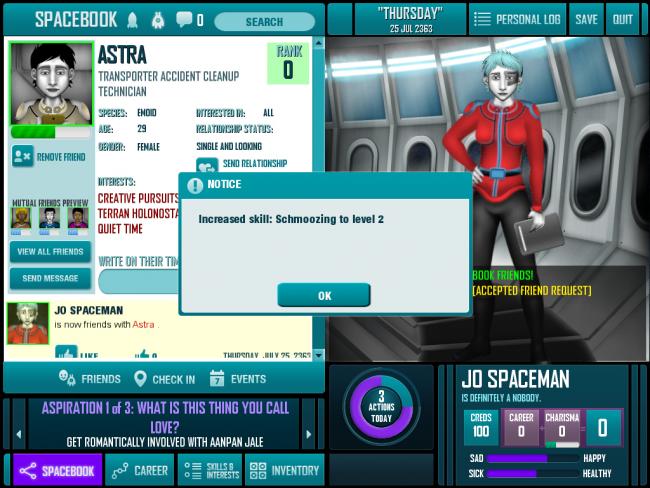 Redshirt plays out like a streamlined version of The Sims: characters begin in a low-paying, but highly competitive job as a Transporter Accident Cleanup Technician, with aspirations of advancing all the way to Commander’s Assistant.  Other aspirations appear throughout the game, related to making friends or love interests, and provide skill improvements—like Schmoozing—as they’re completed.  Those skills are in turn used to improve work performance and friend interactions, creating a cycle of growth for your newbie cadet.

These aspirations and advancements are completed by being active on Spacebook, which also acts as the primary interface for Redshirt.  Most of the gameplay revolves around checking Spacebook pages, adding friends, liking posts, and sending messages to increase relationships.  This admittedly ridiculous theme is pulled off surprisingly well, presented as hilarious satire wrapped in science fiction parody.  NPCs post mundane updates about getting drunk on “Enoid Dream Juice,” or how their friend just “ate that whole Geldar gateau.”  Some characters have the annoying habit of posting frequently in all caps, with important news like “PLAYED SOME SPACEBOOK GAMES.”  Everyone hates it when you like your own status update, a definite Spacebook faux paus.

There is a limit to your daily Spacebook surfing, denoted by the on-screen Action counter.  Free days, like the weekend, allow for six total actions, while work days are split into chunks of one action before work and three afterwards.  Every action on Spacebook—liking a post, adding a friend, etc.—takes up one point, but those points can also be used to schedule events with friends or alone that will improve your happiness, health, skills, and potentially define your interests (which makes it easier to find like-minded Spacebook buddies).  There is actually a surprising amount of activities available, making organizing your day effectively a time management challenge. 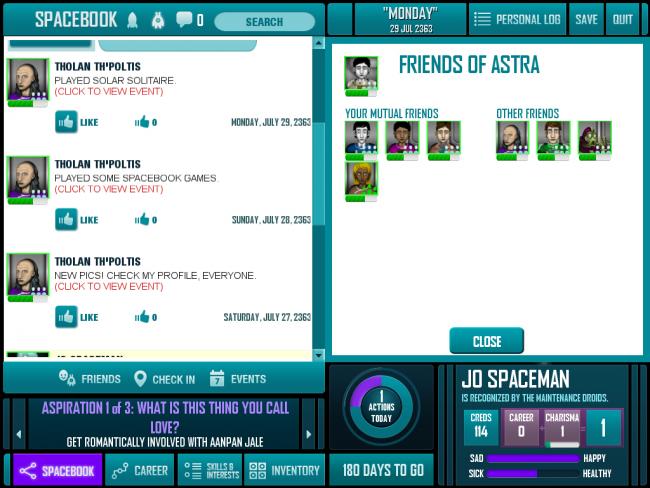 After a few in-game weeks with Redshirt, I’m already more engaged with it than the real Facebook.  Waiting to see if someone will accept a friend request, playing a bunch of Space Solitaire to improve my Games skill, liking all my boss’s status updates so she’ll give me a promotion—it’s strangely compelling in a meta-life way.  When half my coworkers died on an away mission, I was actually sad—until reading the hilarious status update immediately following that “Bennett Croyle died.  Tholex sh’Sheeni received a promotion to their old job!”  Redshirt is full of surprising and endearing moments like this, and plenty of unexpected references (like a ship named “Apple Kid,” Earthbound fans).

Considering this is only an Alpha build, I can’t wait to see how Spacebook evolves from here—as long as it doesn’t involve ads.  I don’t need to be reminded of the Robocat that is just out of my price range, but will make for an enviable status update once I buy it.